Georgetown University invited three of China’s most renowned “U.S. watchers” to engage in a public dialogue on the trajectory of U.S.-China ties and explored the course of the bilateral relationship at this critical juncture where global competition is rising between the world's two largest economies. The public forum featured Georgetown Asian Studies Professor Evan Medeiros, Peking University Professor Wang Jisi, Tsinghua University Professor Xue Lan, and Fudan University Professor Wu Xinbo. The panelists fielded a range of questions from host Dennis Wilder, managing director of the Initiative for U.S.-China Dialogue on Global Issues.

At this difficult time of increasing global competition and high trade tensions, many are worried about a shift towards a Cold War mentality between the United States and China. In contrast this event brought together top scholars in an atmosphere of trust and collaboration to start generating meaningful solutions to issues plaguing the U.S.-China relationship. A diverse audience, including former ambassadors, members of the U.S. Department of Defense, university students, and faculty, arrived at Georgetown University to hear the panelists’ views on this critical topic.

Are We Entering a New Cold War?

“We want to support all countries which are in power, which can deal with China. That is vastly different from China’s old strategies,” said Professor Wang Jisi. “I mean in the Cold War years, China also, I think, made mistakes in those years in supporting wholeheartedly the so-called revolutionary movements in almost every country. You know, Myanmar, or Palestine, African countries. So this, ideologically, this is different from the Soviet Union, and I think ideology, as I just said, is still changing.”

Despite increased competition the speakers reaffirmed the importance of continued economic engagement.

“I think if we want to… check the long-term trend of this relationship we have to look at the economic dimension. The economic factor really holds the key to this relationship because for leaders in both Beijing and Washington this is the primary incentive for them to reach out to each other and forge ties,” said Professor Wu Xinbo. “So if we continue to have expanding economic ties between two countries this will have the positive spillover effect on the political and military dimension, even though they will not serve the political and military differences.”

Following the panel discussion, audience members contributed questions of their own. The questions covered a variety of topics including the future of Taiwan, educational reform in China, prospects for NGO cooperation, rule of law in China, and the existence in Washington, D.C., of a “China consensus.” The conclusion of the successful scholars’ workshop on April 4, 2019 and the subsequent public forum demonstrated that there is still room in the U.S. capital for constructive dialogue on U.S.-China relations and ways to positively move the relationship forward.

The event was jointly sponsored by the Initiative for U.S.-China Dialogue on Global Issues and the Walsh School of Foreign Service Asian Studies Program.

Dr. Wu Xinbo is a professor and dean of the Institute of International Studies, and a director at the Center for American Studies at Fudan University.

Dr. Xue Lan is the Cheung Kong Chair Distinguished Professor at the School of Public Policy and Management, Tsinghua University. He serves as the dean of the Schwarzman Scholars Program.

Dr. Evan Medeiros is the Penner Family Chair in Asian Studies at the Walsh School of Foreign Service and a senior fellow for the Initiative for U.S.-China Dialogue on Global Issues at Georgetown University.

Prof. Dennis Wilder is the managing director for the Initiative for U.S.-China Dialogue on Global Issues at Georgetown University, where he also serves as an assistant professor of practice in Asian studies in the School of Foreign Service. 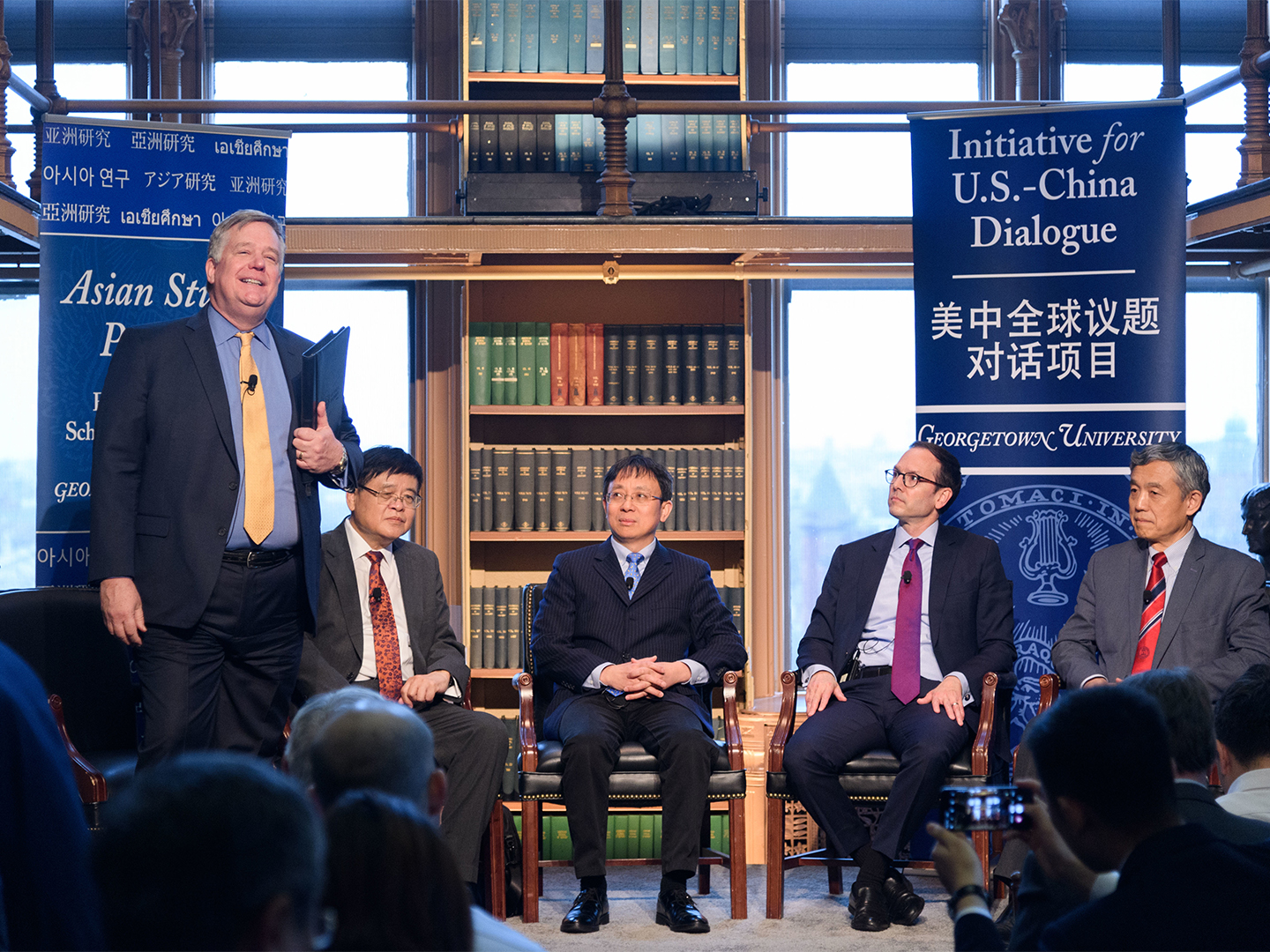 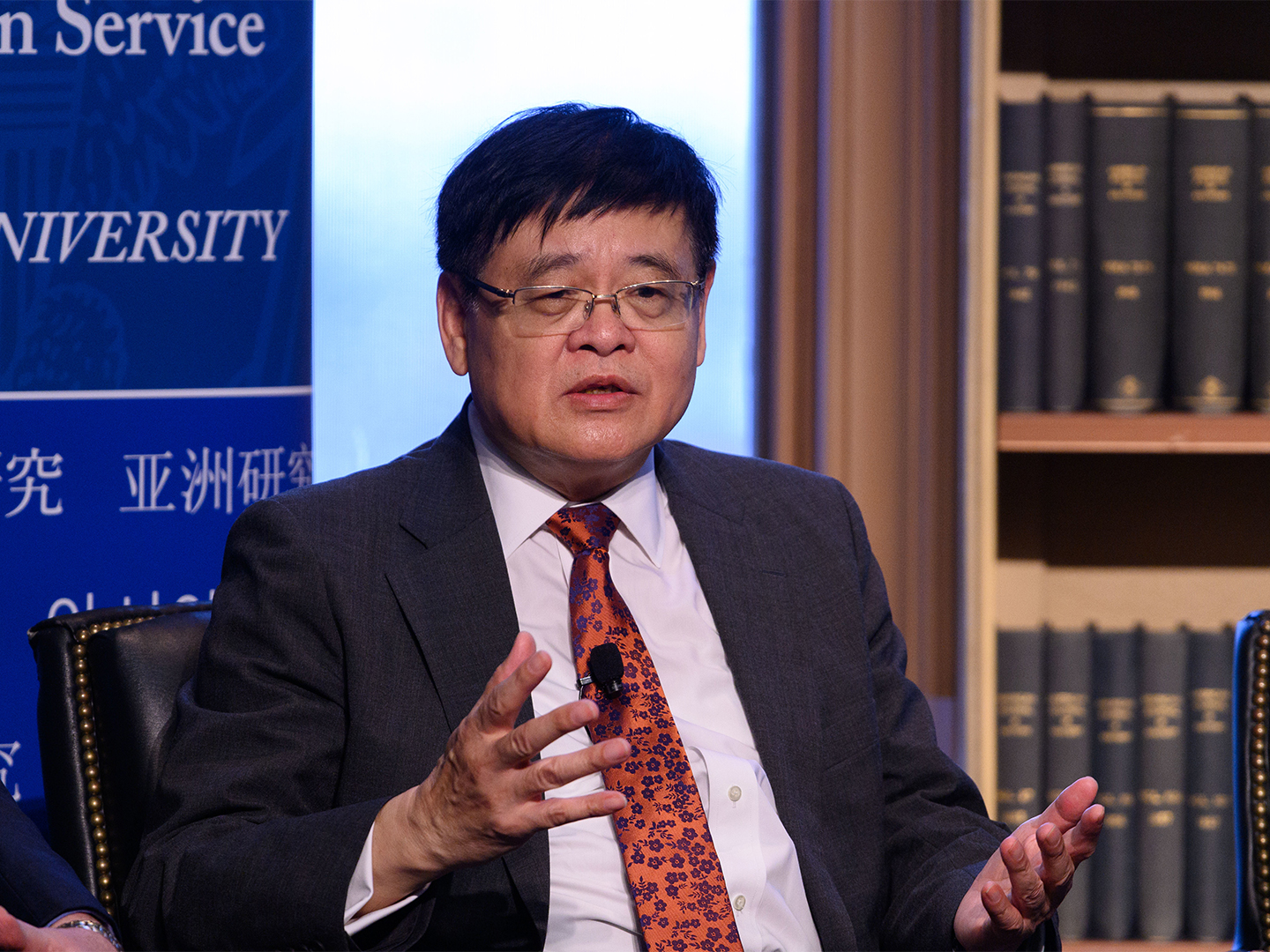 Professor Wang Jisi dicusses why he believes the United States and China are not entering a new Cold War. 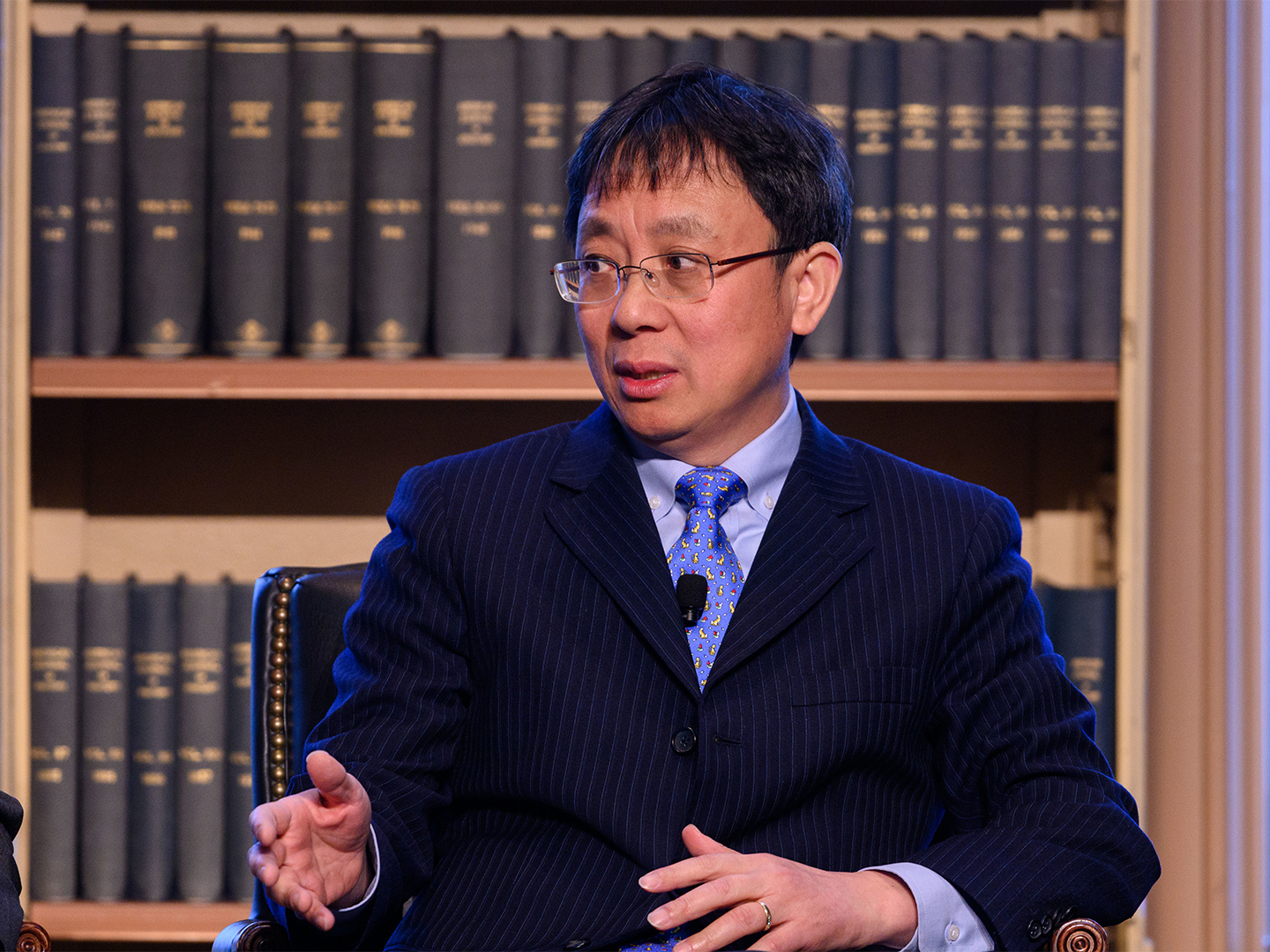 Professor Wu Xinbo discusses the differences between the U.S.-USSR and U.S.-China relationships. 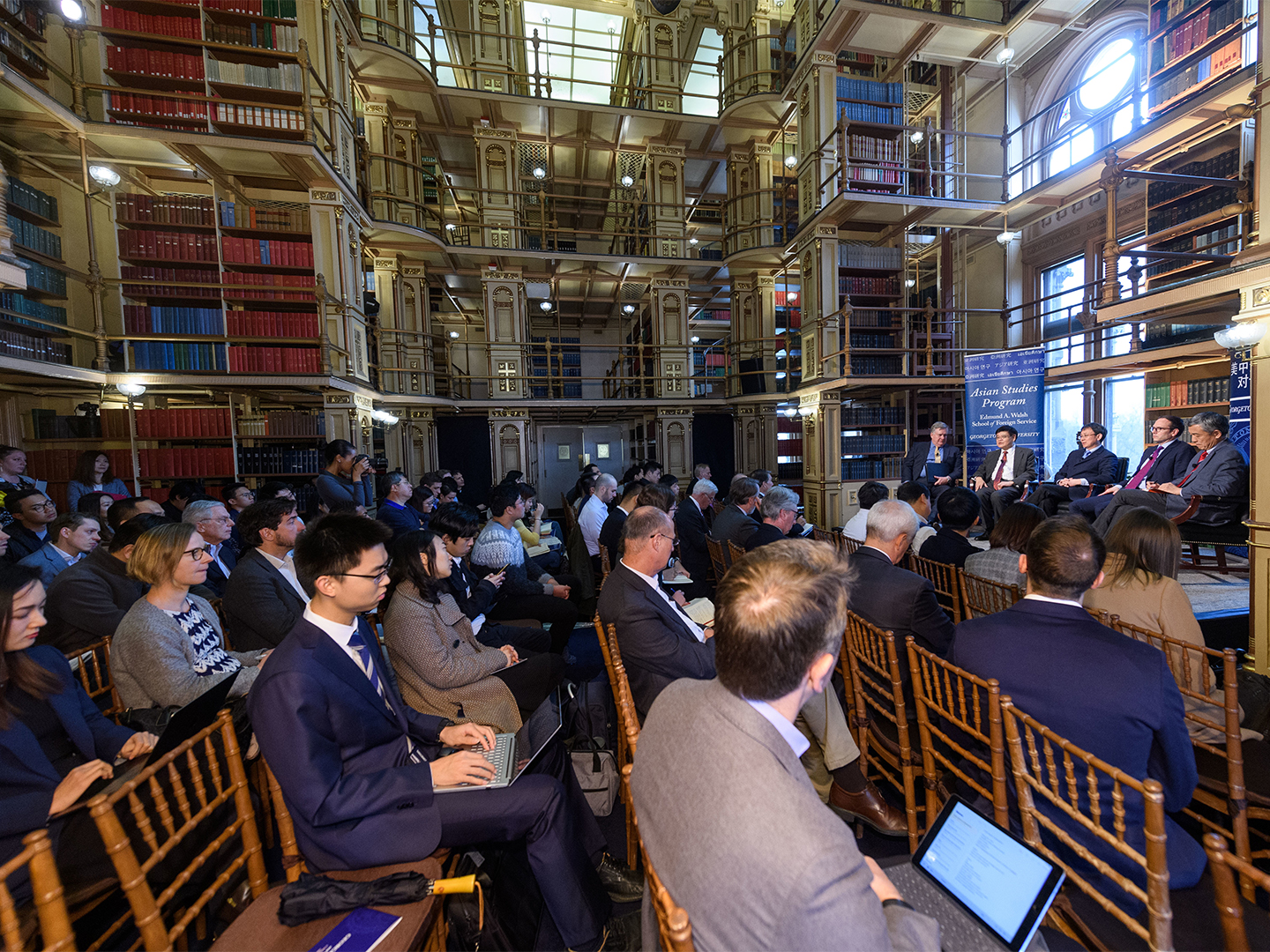 Audience members listen to the public dialogue in Riggs Library. 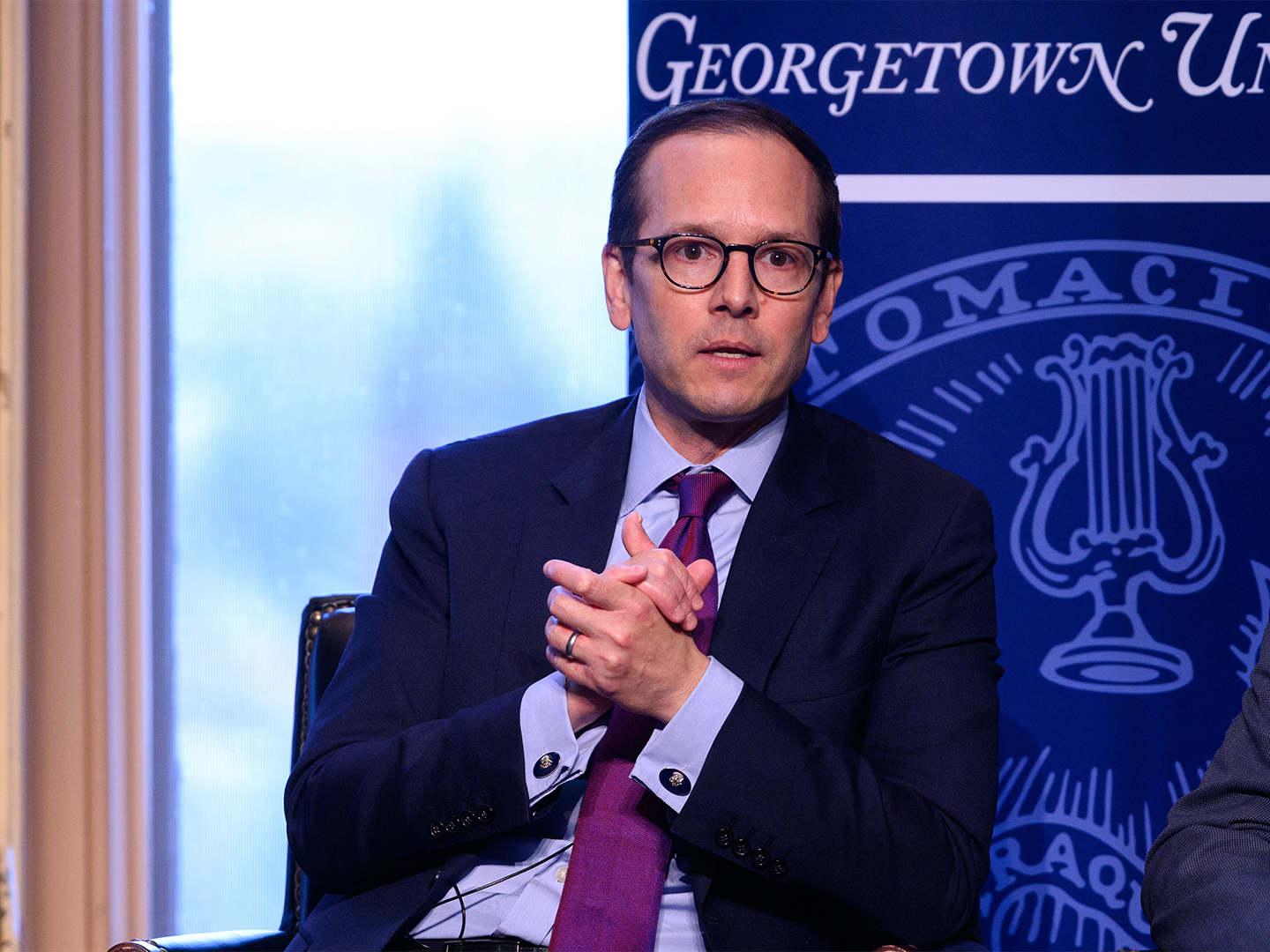 Professor Evan Medeiros provides insight on issues of revisionism in the U.S.-China relationship. 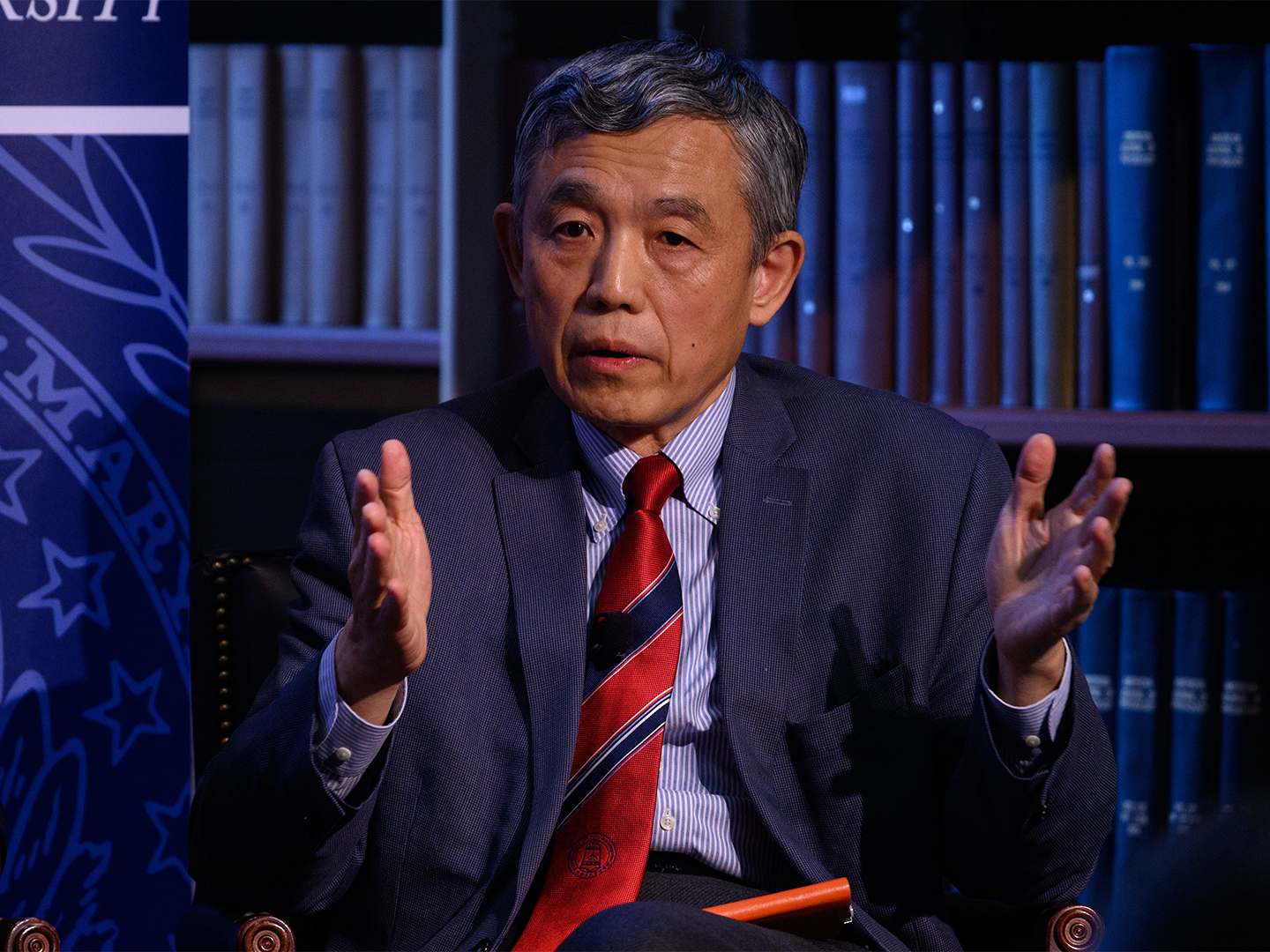 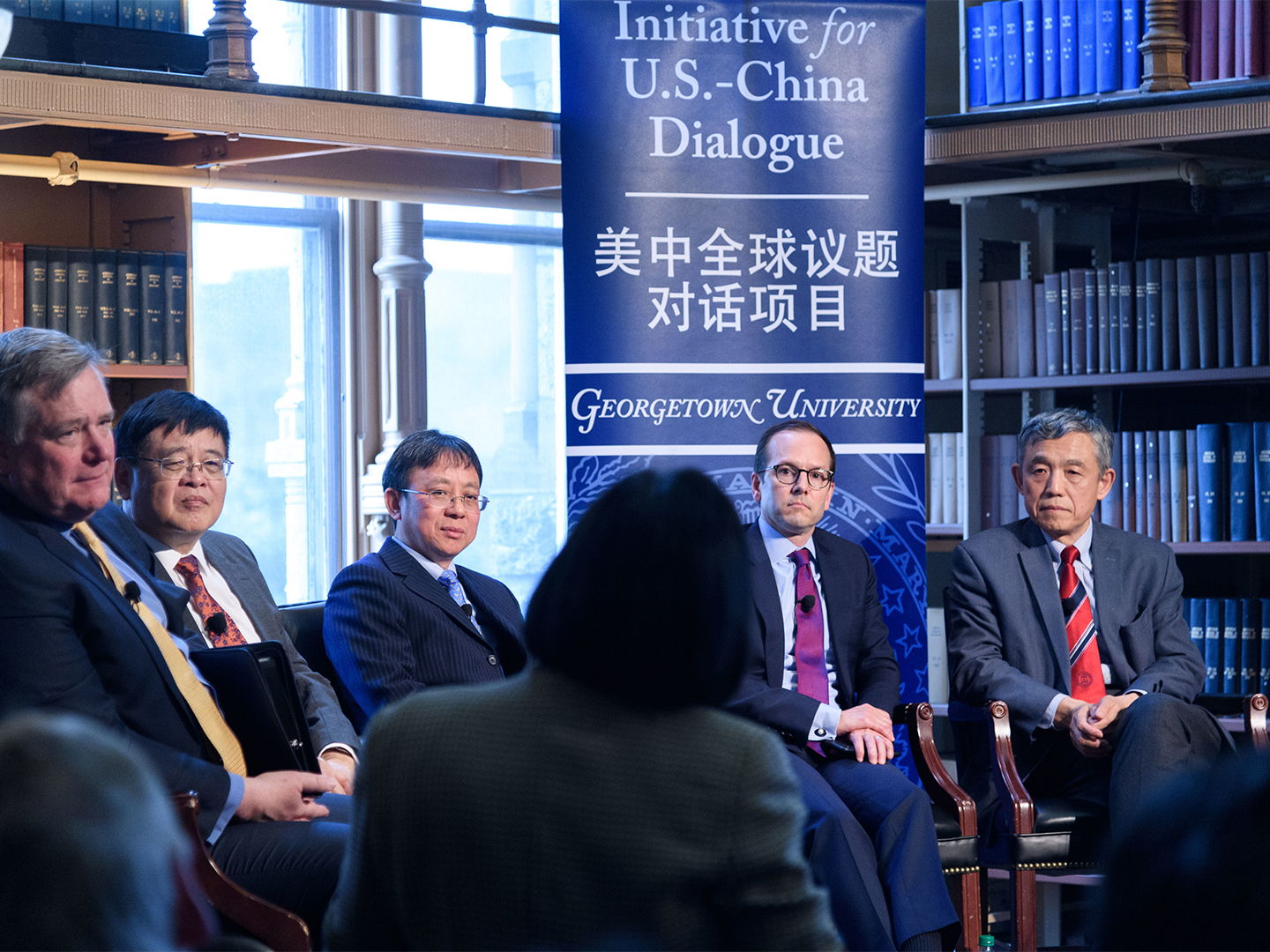 Ambassador Julia Bloch asks the panel to go deeper on how they see China changing in the next forty years. 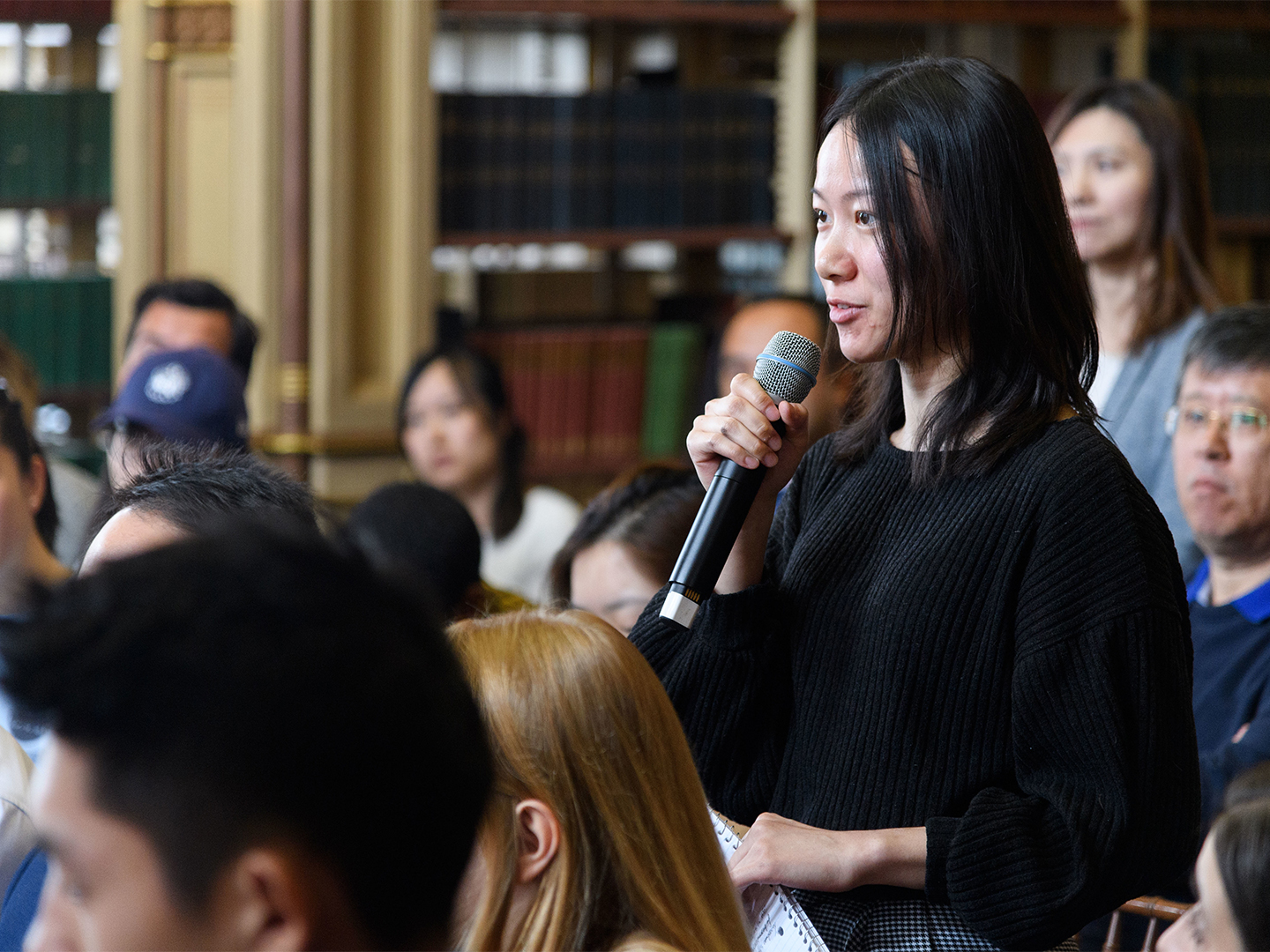 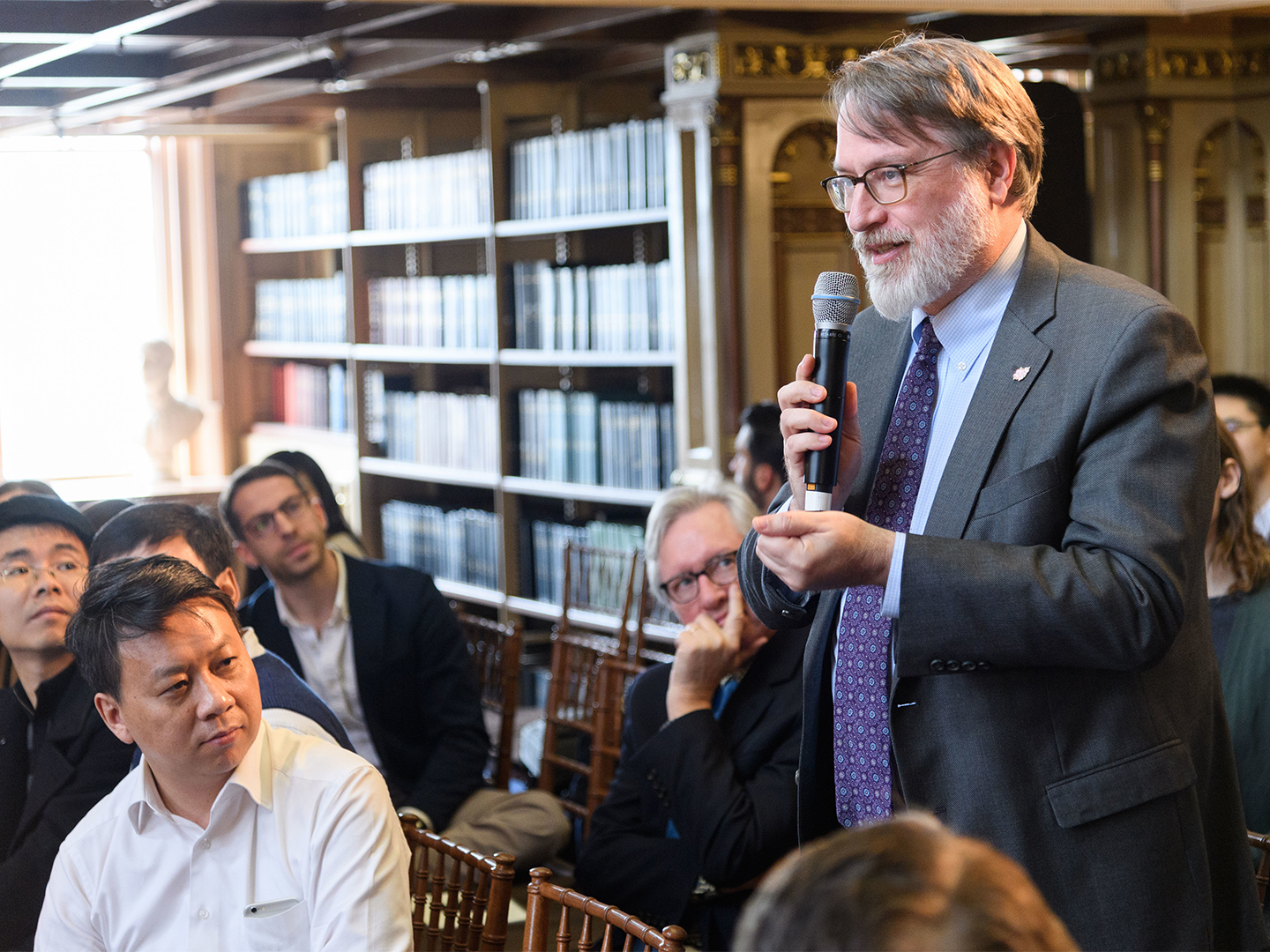 Benjamin Self, of the Maureen and Mike Mansfield Foundation, asks the panel to discuss the future of NGOs in China. 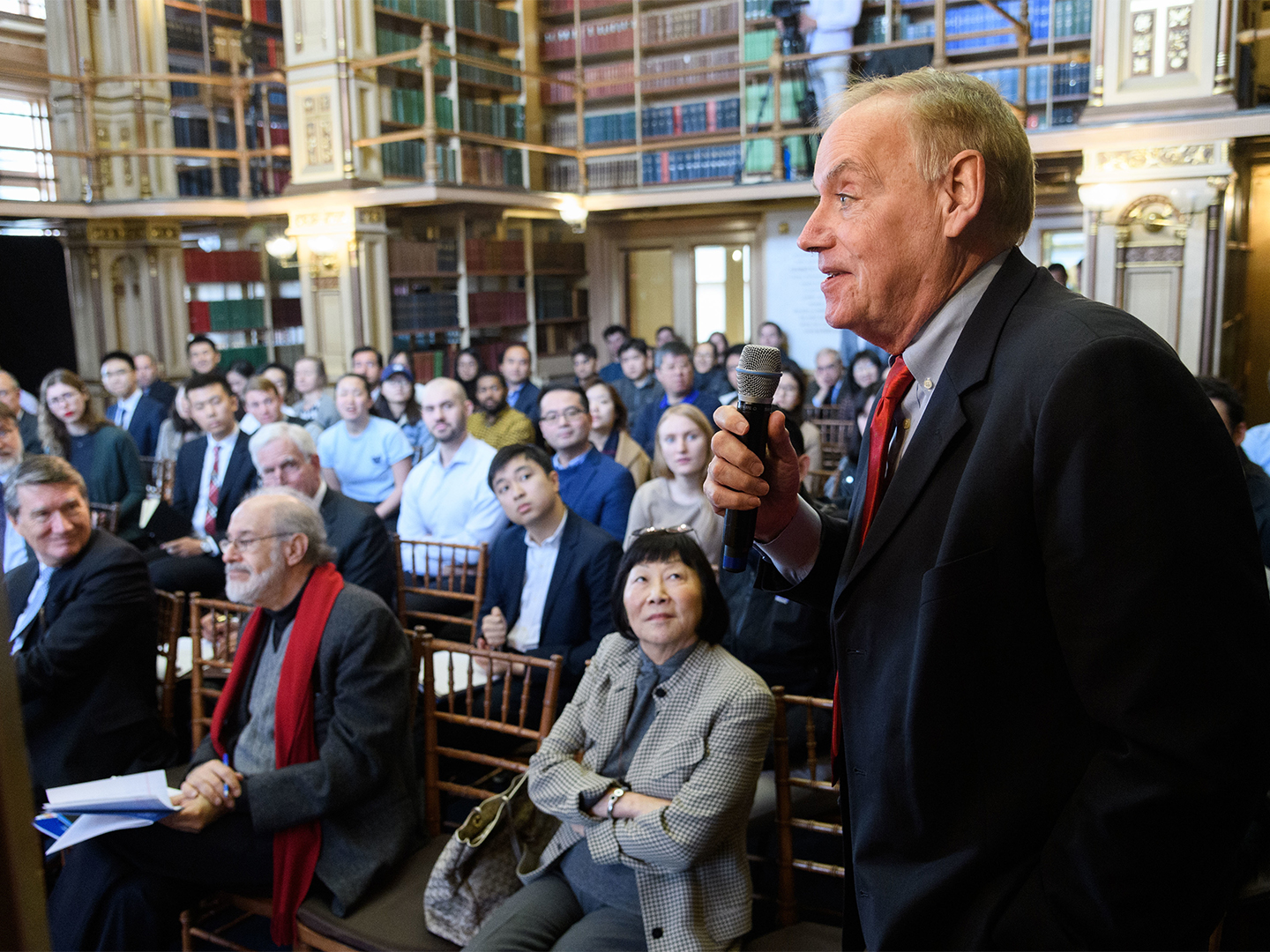 Georgetown Law professor James Feinerman questions the panel on the status of rule of law in China today. 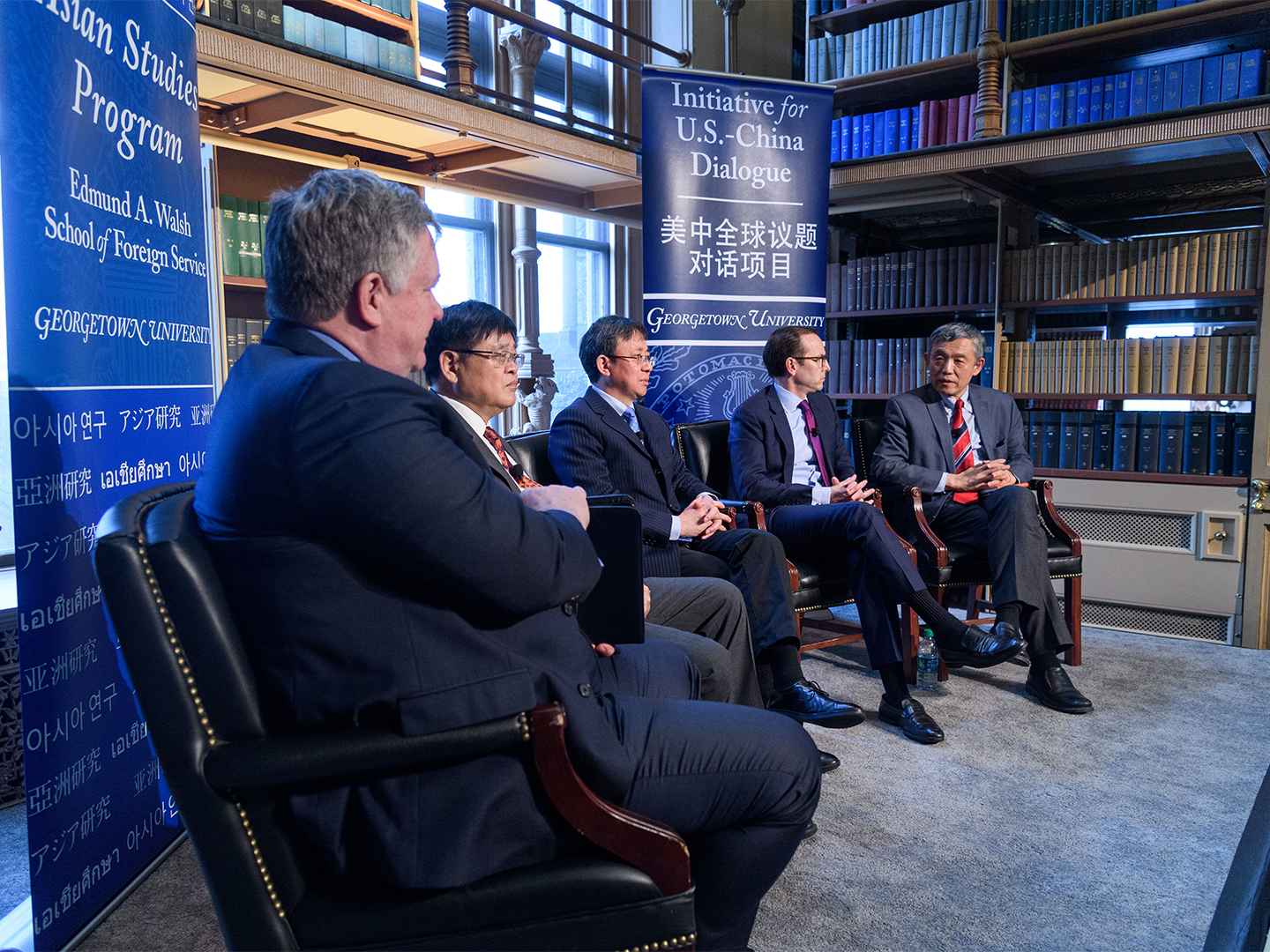 The panel responds to audience questions. 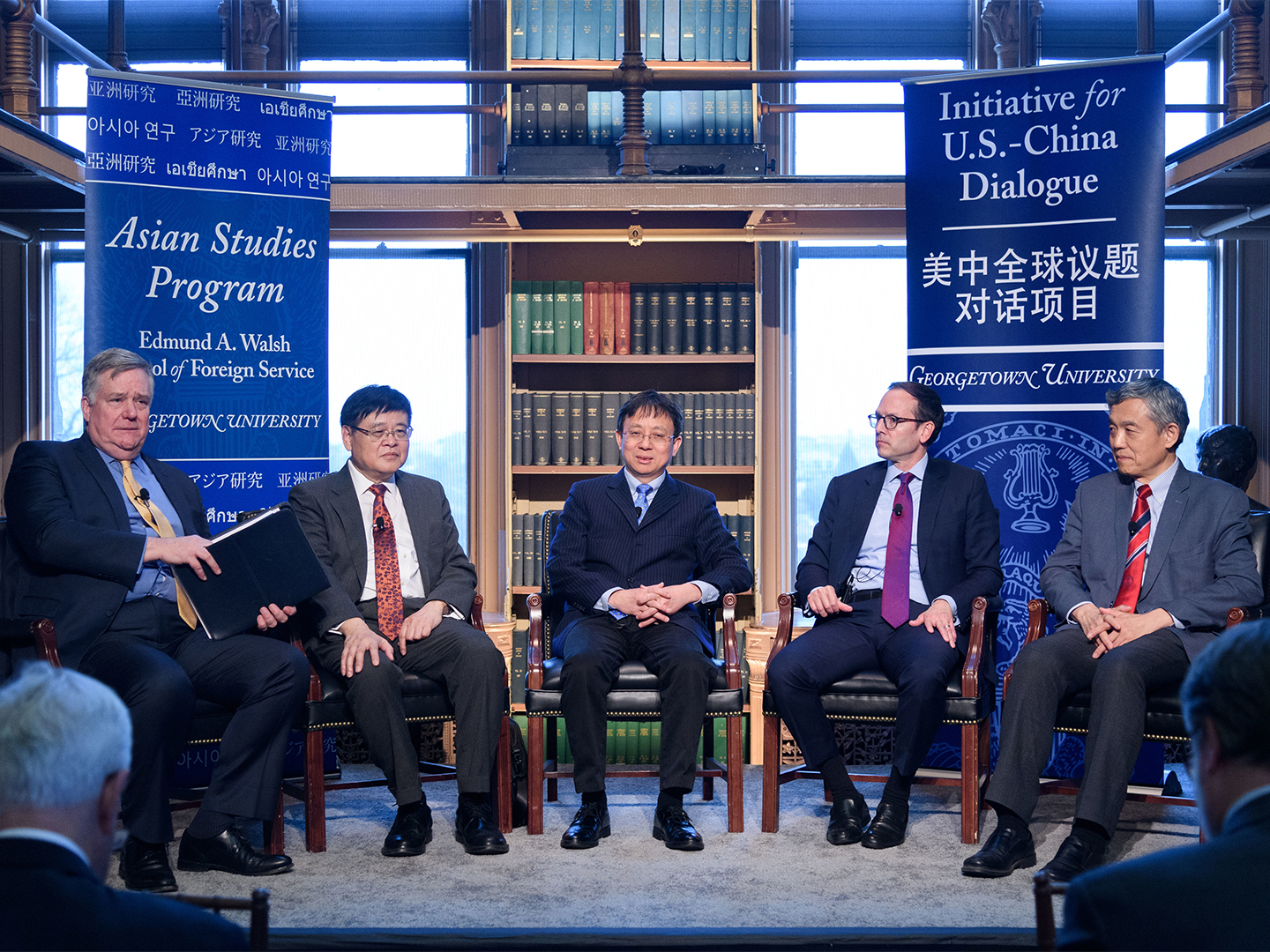 Closing remarks are made following a successful public forum.