Can U.S.-China Competition Be Managed without Conflict? 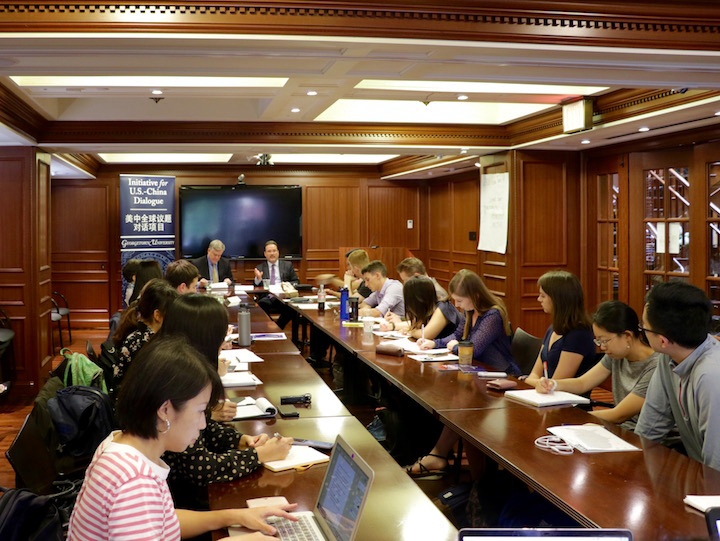 On October 9, 2018, 95+ communities across the United States joined in a national conversation on China. The two-part event, sponsored by the National Committee on U.S.-China Relations and the Georgetown Initiative for U.S.-China Dialogue on Global Issues featured an interactive webcast discussion with former secretary of state Condoleezza Rice on the complex Sino-American relationship, as well as an on-site discussion with Michael Green and Dennis Wilder, both former senior directors at the NSC and current professors of the Georgetown Asian Studies Program on the topic "Can U.S.-China Competition be Managed without Conflict?"

Secretary Condoleezza Rice served as the 66th Secretary of State of the United States, the second woman and first African American woman to hold the post. She also served as President George W. Bush’s Assistant to the President for National Security Affairs (National Security Advisor) from January 2001 to 2005, the first woman to hold the position. Secretary Rice is currently the Denning Professor in Global Business and the Economy at the Stanford Graduate School of Business, Thomas and Barbara Stephenson Senior Fellow on Public Policy at the Hoover Institution, and professor of Political Science at Stanford University. She is also a founding partner of RiceHadleyGates, LLC.

Michael Green is director of the Asian Studies Program and chair in modern and contemporary Japanese politics and foreign policy at the Walsh School of Foreign Service at Georgetown University. He is also a senior vice president for Asia and Japan Chair at the Center for Strategic and International Studies. He previously served as special assistant to the president for national security affairs and senior director for Asian affairs at the National Security Council.