Eleven Georgetown graduate students took the unique opportunity this summer to get a glimpse of China’s economic future during a 10-day study tour. The theme of the study tour was China’s 40 years of “Reform and Opening Up”.

The visits to Beijing, Guiyang, and Shenzhen taught the students about China’s past as well as its future through visits to cutting edge facilities like China’s big data center in Guiyang and Huawei Corporation in Shenzhen, the Chinese company at the center of the global 5G controversy.

First-Hand Exposure to the High Stakes in U.S.-China Relations

Amidst rising trade tensions and increased economic conflict between the United States and China, this trip came as a timely reminder of what is at stake if both sides are unable to peacefully resolve the trade war. In Beijing, the students were briefed by the Ministry of Foreign Affairs, the National Development Reform Commission, and the Development Research Center, on various dimensions of China’s economic reform and rapid development. The students took the opportunity to ask some tough questions about China’s actions and responses to tariffs imposed by the Trump administration.

The students also had an in-depth dialogue with retired Major General Yao Yunzhun of the People’s Liberation Army (PLA). General Yao, a 46-year veteran of the PLA and one of only a handful of female generals in China, gave candid feedback to the students on her perceptions of U.S.-China relations today compared to what she witnessed over the past 40 years. They also heard from a scholar, Dr. Tong Zhao of the Carnegie-Tsinghua Center for Global Policy, on the current status of the U.S.-China relationship, and his predictions for the future. Many students enjoyed the frank discussion with Dr. Zhao, Rocio Ortega, a Latin American studies graduate student at Georgetown, said,

“One of the highlights of the trip was having the opportunity to listen to Dr. Zhao whose research focuses on strategic security issues, including nuclear weapons strategy, arms control, and other international security issues. …. He best summarizes the ongoing mistrust between our two countries as ‘both sides do not understand each other and we need to raise awareness on deep perception gaps’ - all which made this exchange student trip the more relevant and ahead of the game.”

The second stop was Guiyang, the capital of Guizhou province in southwest China. Guiyang is rich in natural resources and an up-and-coming center for international big data innovation. They toured the Guiyang Big Data Center and learned how big data companies in China are harnessing data in different ways for use across all aspects of business, government, and society. Georgetown SFS graduate student Brody Weinrich noted,

Guiyang represents a grand vision for one of China’s poorer, more rural provinces and an ambitious project which could help millions of Chinese citizens. Furthermore, touring the big data exhibition center left my jaw dropped, as I had little prior knowledge of big data. Learning not only about big data’s possibilities but also the rationale for trying to make Guiyang a big data capital proved fascinating.

The final leg of the trip took the students to Shenzhen, home to some of the biggest tech companies in China. The students toured the Ping An Finance Centre, the fourth tallest building in the world, where they took in views of the sprawling metropolis. They also visited the Huawei headquarters campus to learn more about the company’s 5G efforts. The students met with company representatives to discuss Huawei’s plans for future development and concerns over the future of global cyber security. After viewing the exhibition floor, where the students saw the latest in 5G technology including smartphones, city-wide Wi-Fi antennas, and virtual reality gear, they participated in a question and answer session with Huawei representatives. Peter Lee, a School of Foreign Service student, remarked that,

“Considering U.S. trade war with China, Huawei was an amazing choice to include in our trip. Specifically, I was excited to engage with Huawei’s Public Policy Team and how they perceived the United States’ constant criticisms towards them. They insisted on how Huawei is focused on maintaining its sole focus on being a manufacturer and telecom company despite international concerns on their role as a Chinese political and trade pawn. The meeting was a fruitful one and I learned how Huawei is making efforts in becoming a more formidable company in the domestic and international markets.”

Nothing Beats Gaining Ground on Truth

Although the graduate students came from a variety of educational backgrounds and differing levels of involvement with China, they all came away with a deeper understanding of the complexity of China and the stakes for their generation in the U.S.-China relationship of the 21st century. For the economics majors, they deepened their understanding of the amazing transformation of China’s economy in the past 40 years, the challenges of today as the double-digit rates of GDP become a thing of the past, and also how a digital revolution is rapidly transforming China again. For the international relations majors, they found a deeper understanding of China’s perspective on the international world order and the pressures that Beijing is feeling from the United States and other countries over its choice of a mixed economy where state-owned enterprises remain critical players. Economics student Nicholas Osbourne had this to say about his experience on the trip.

Overall, the China Study Tour provided by the Initiative for U.S.-China Dialogue on Global Issues and CUSEF offers a unique hands-on experience of China today and its relation to the United States. I am very fortunate to have been a part of this year’s amazing group of students, and I am very grateful for being able to ask my own questions and learn from my peers. 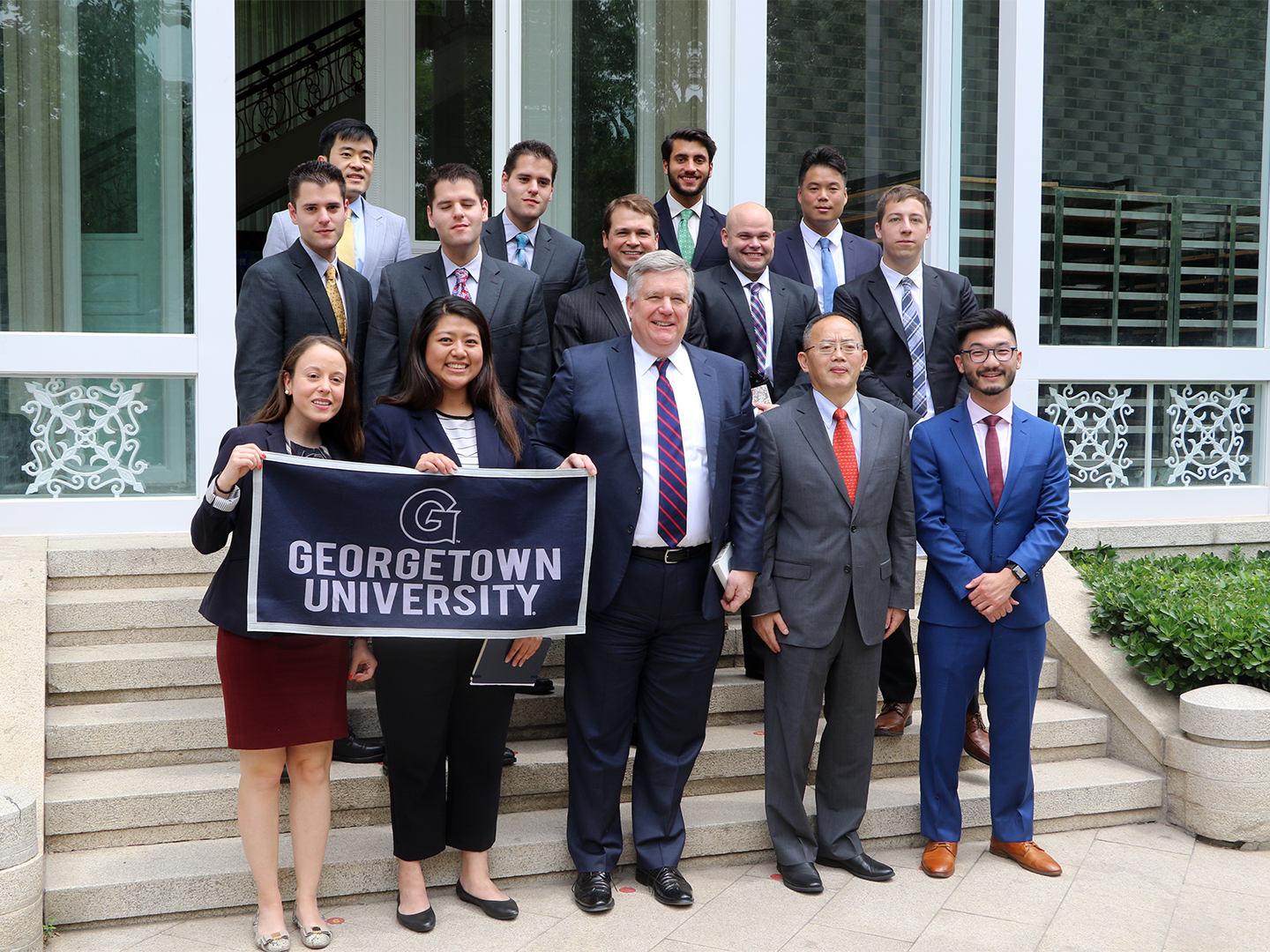 Georgetown students with Zhang Heqiang, Director General of the American and Oceanian Affairs Department of the CPAFFC. 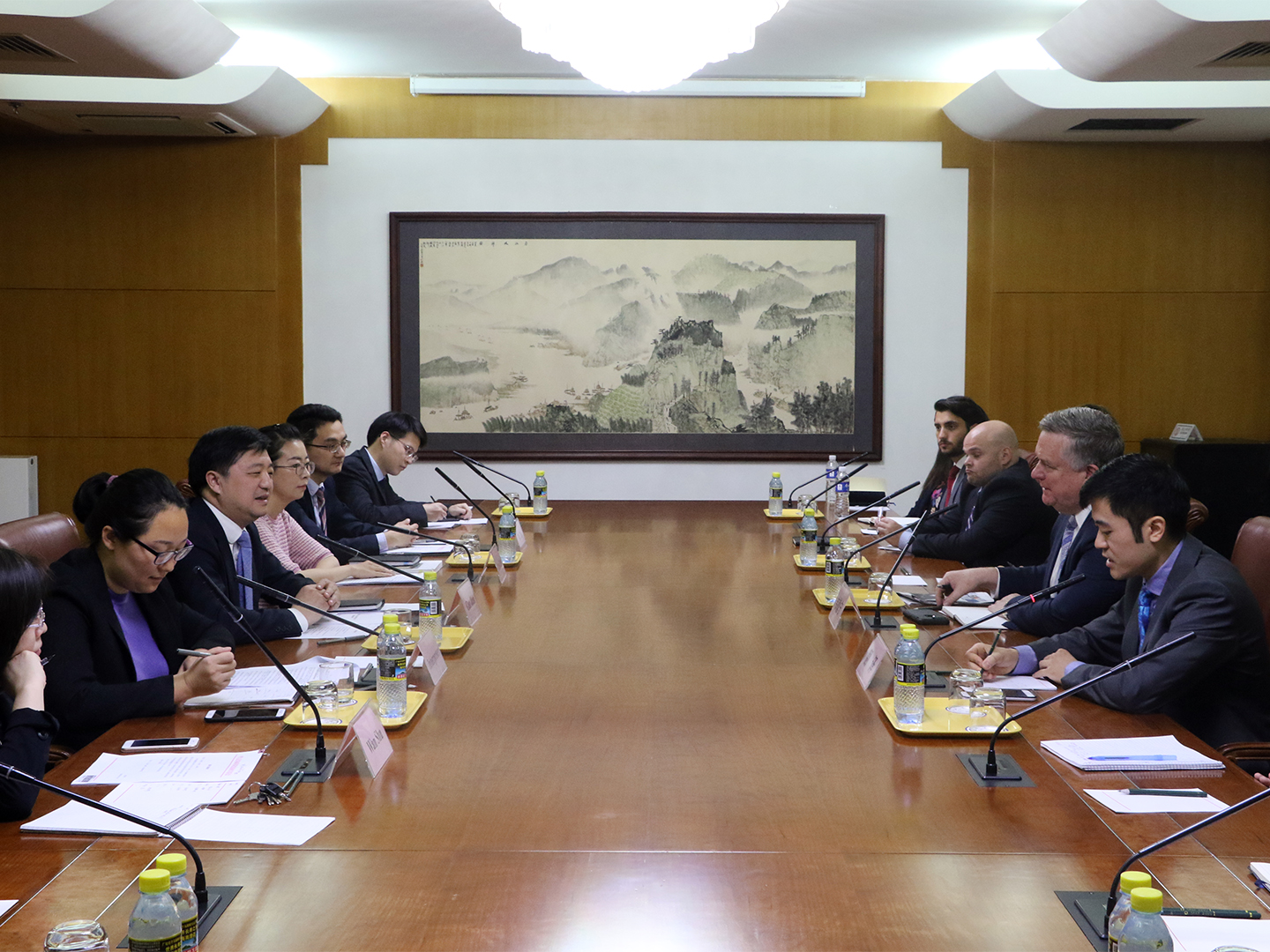 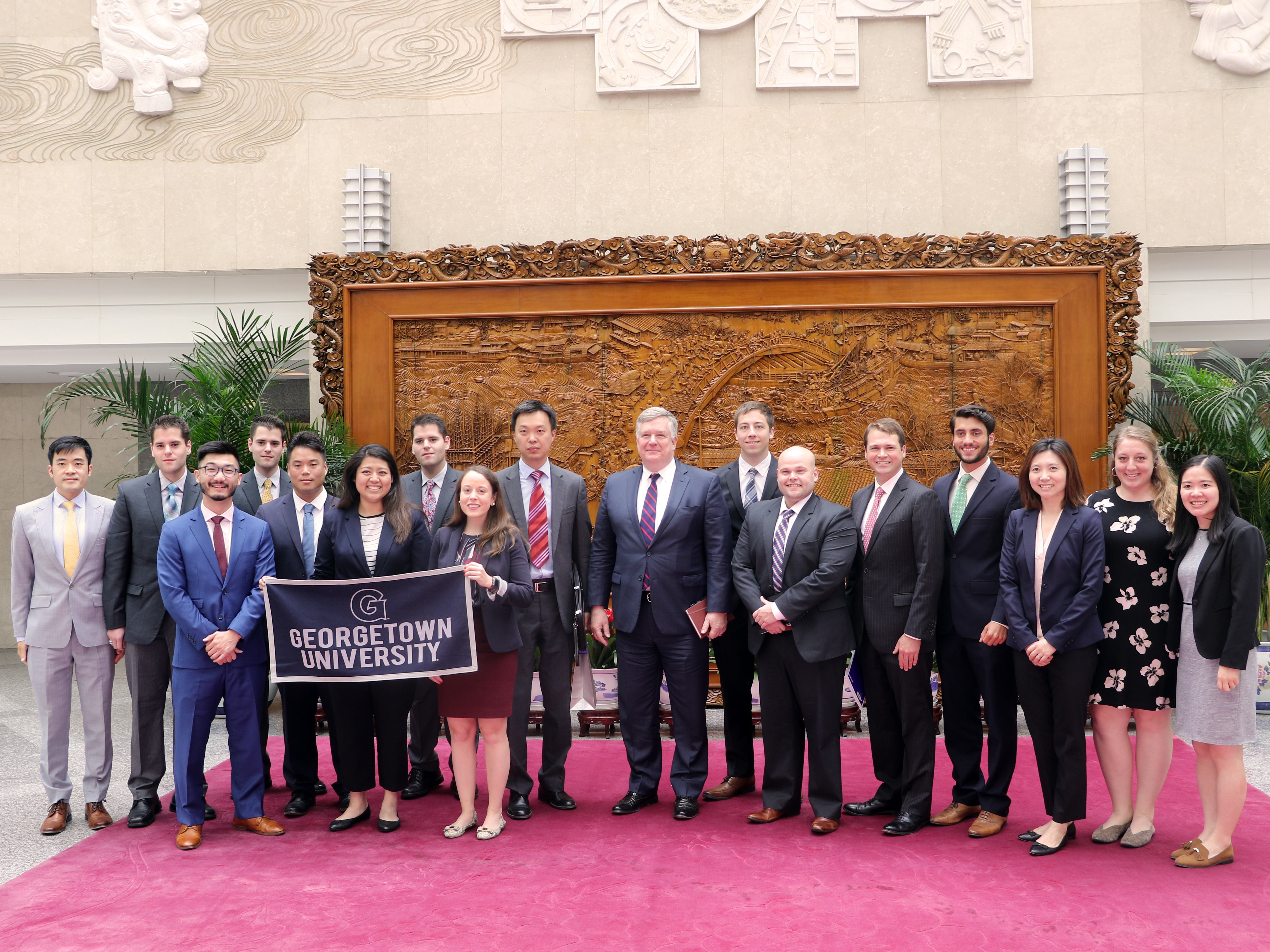 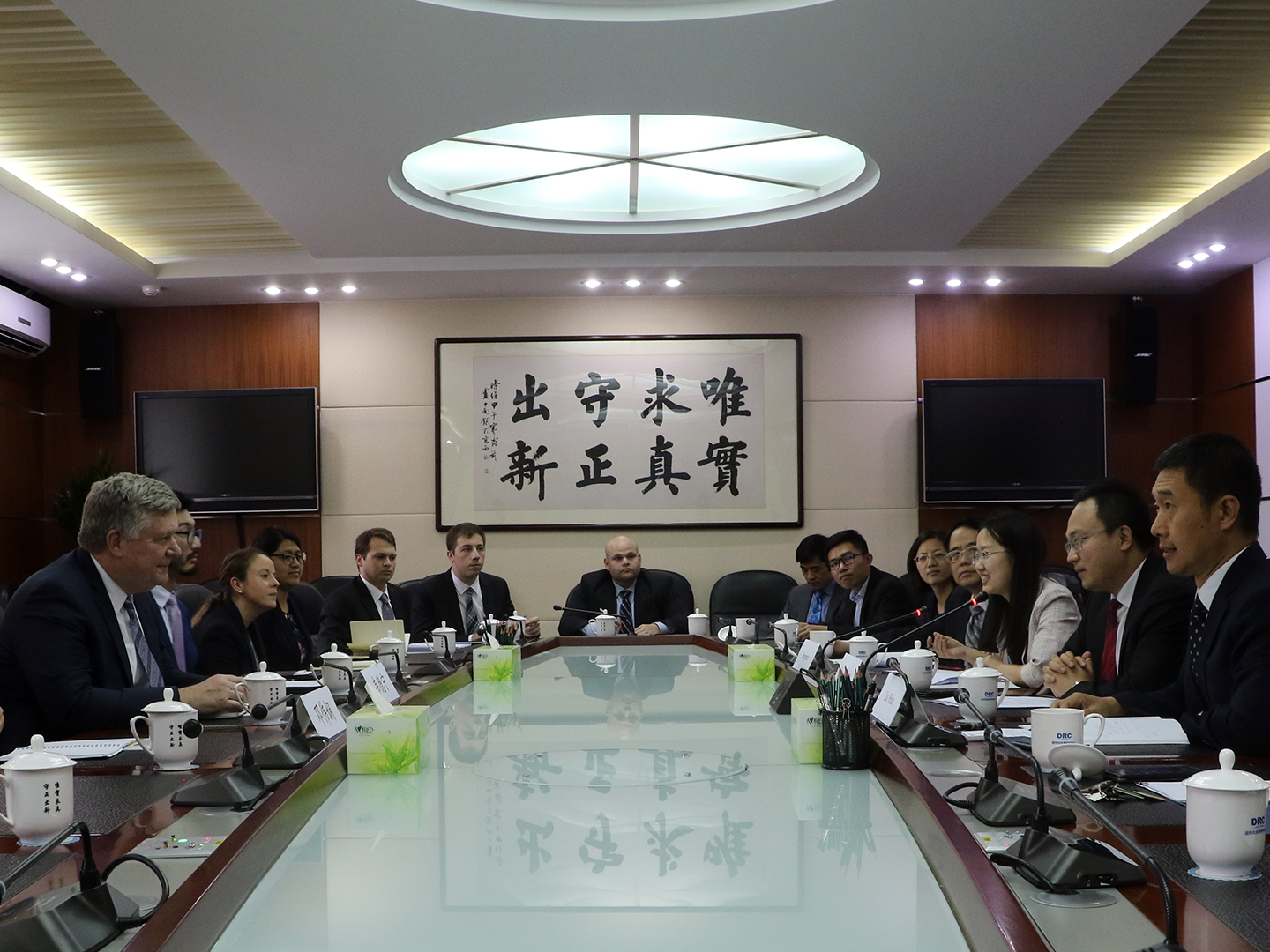 Representatives from the Development Research Center sharing their insights on the U.S.-China trade war. 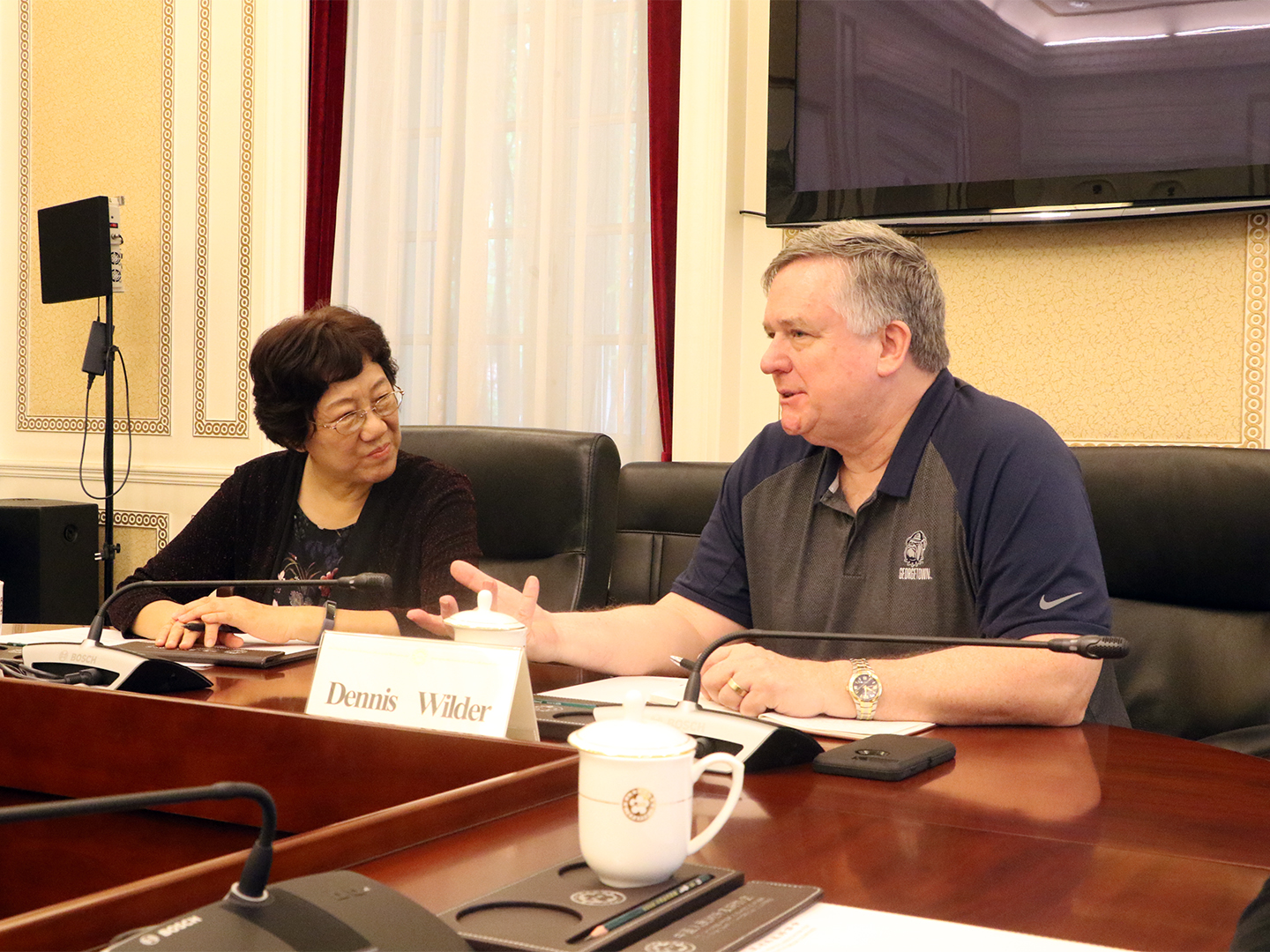 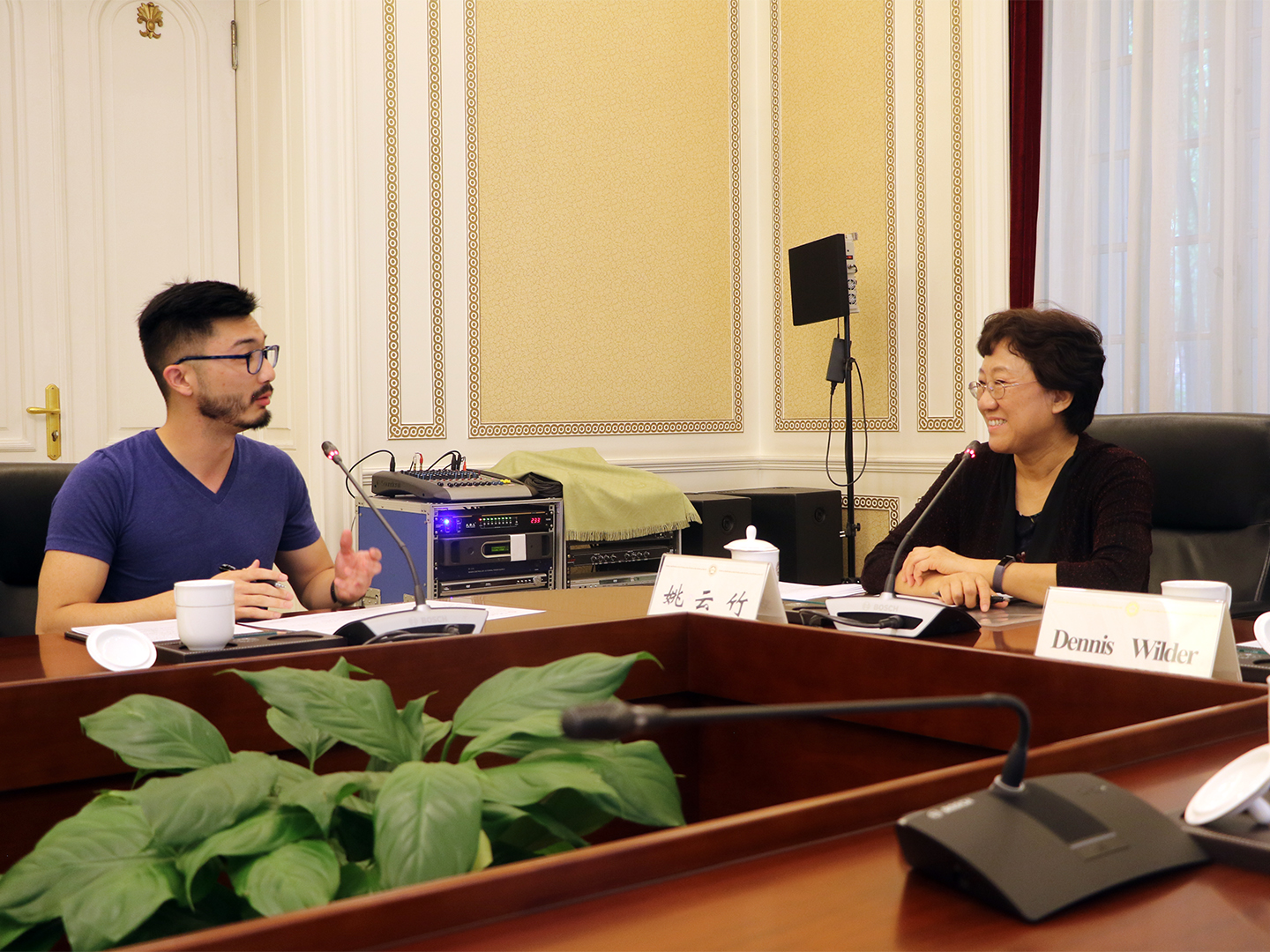 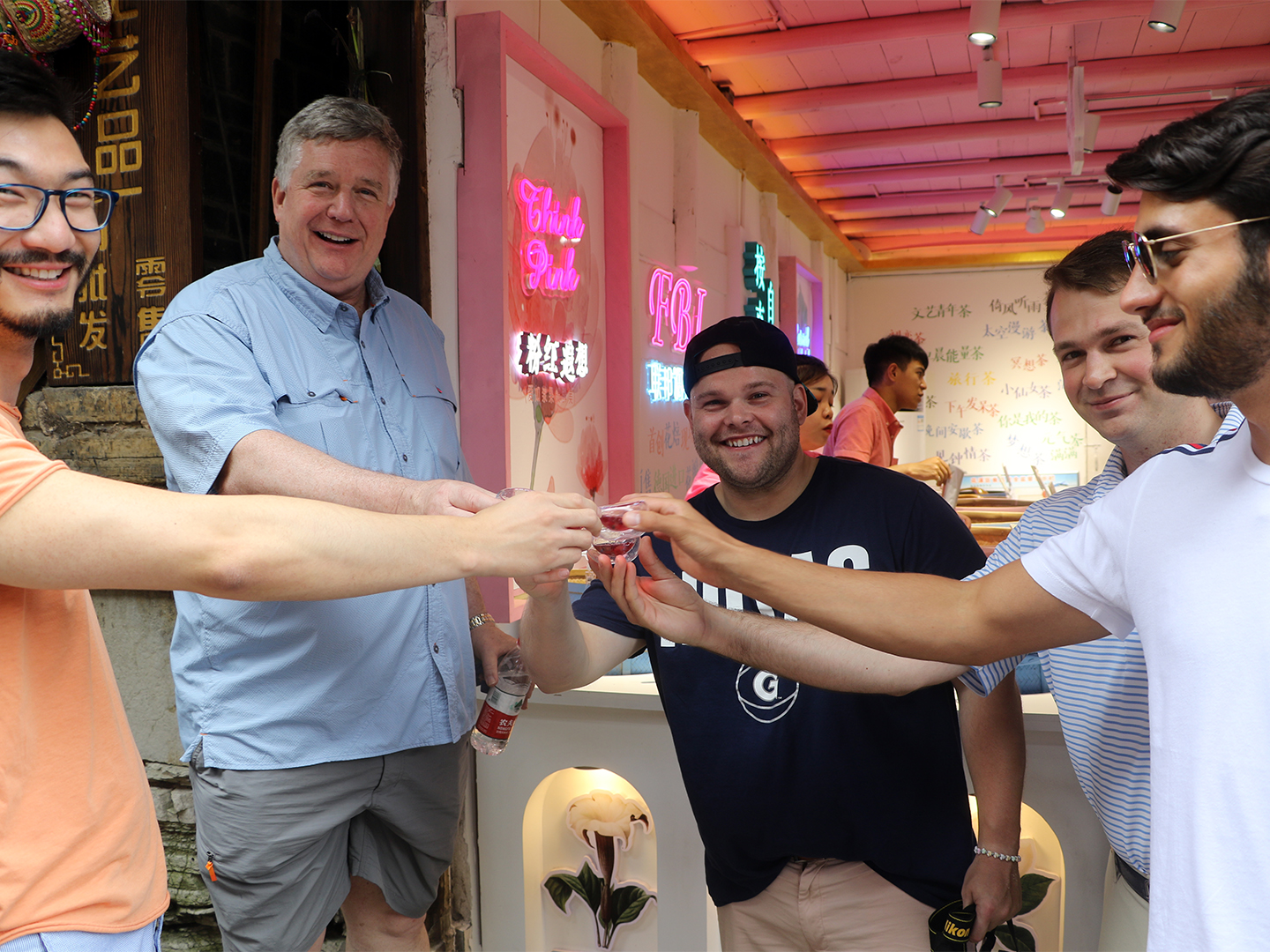 Enjoying some tea in the Qingyan Ancient Town near Guiyang. 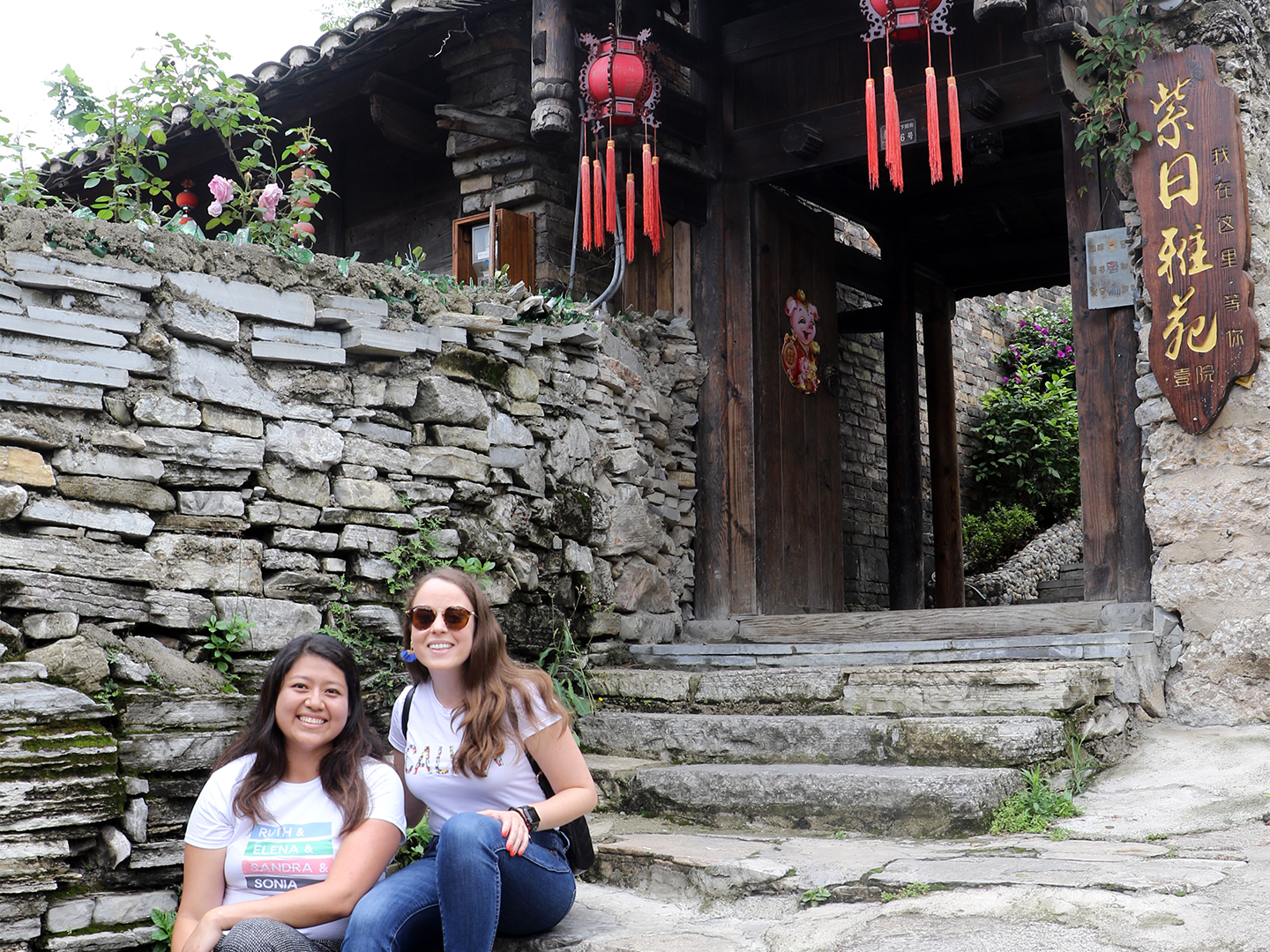 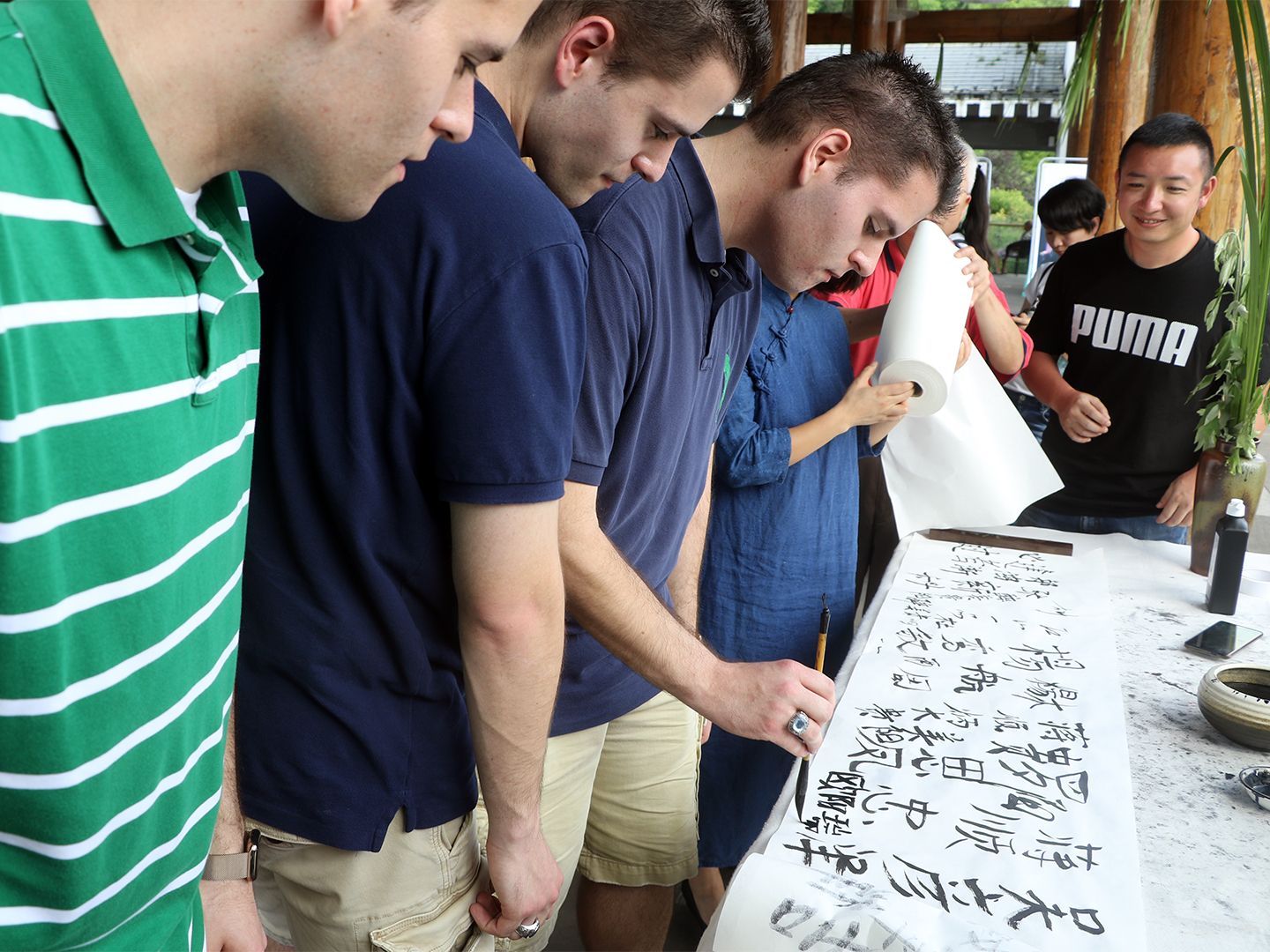 Benjamin, Nicholas, and Zachary Osbourne practicing their calligraphy in the Hall of Confucius Studies. 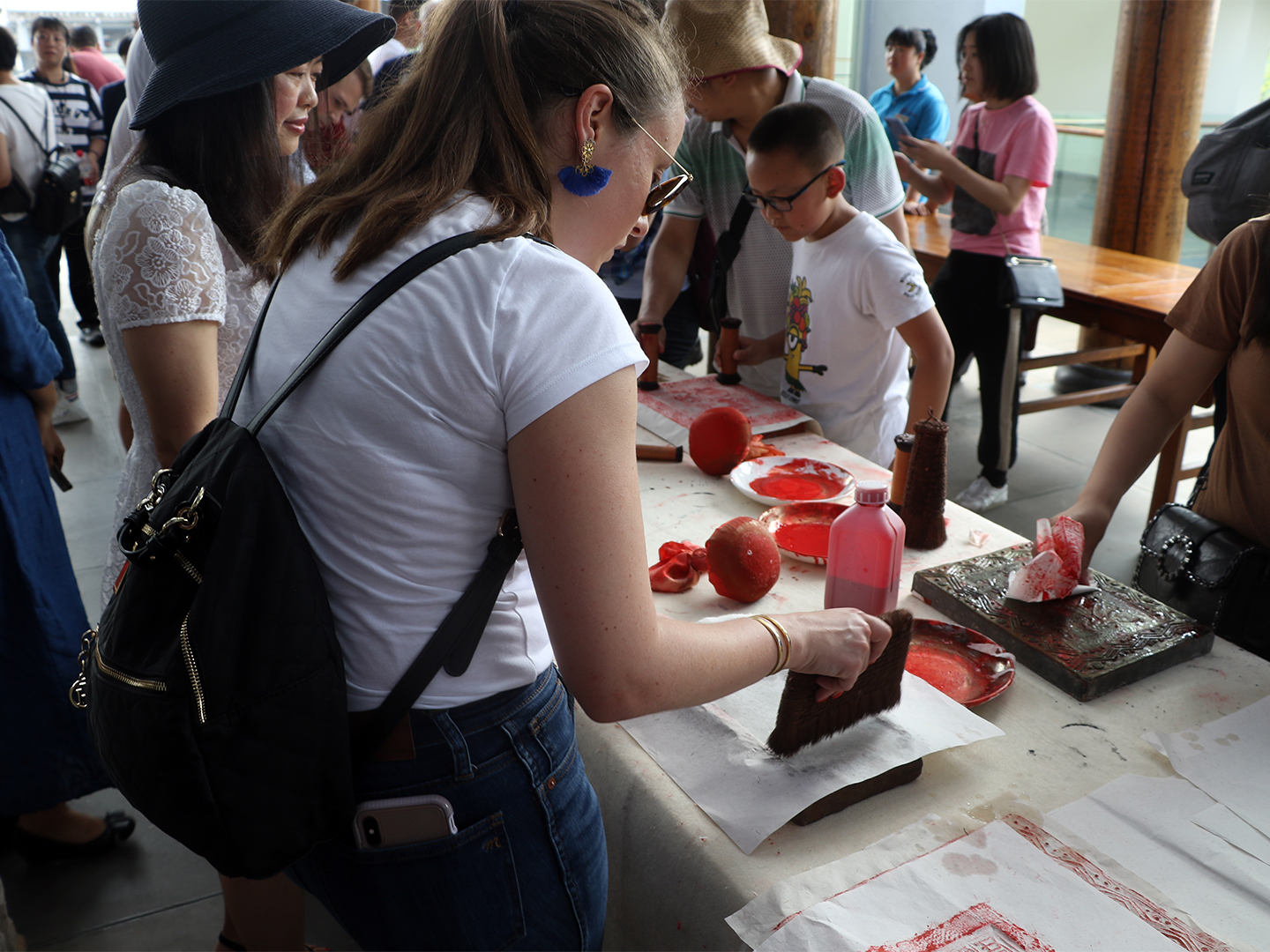 Ana Montanez learning to make an ink print at the Hall of Confucius Studies. 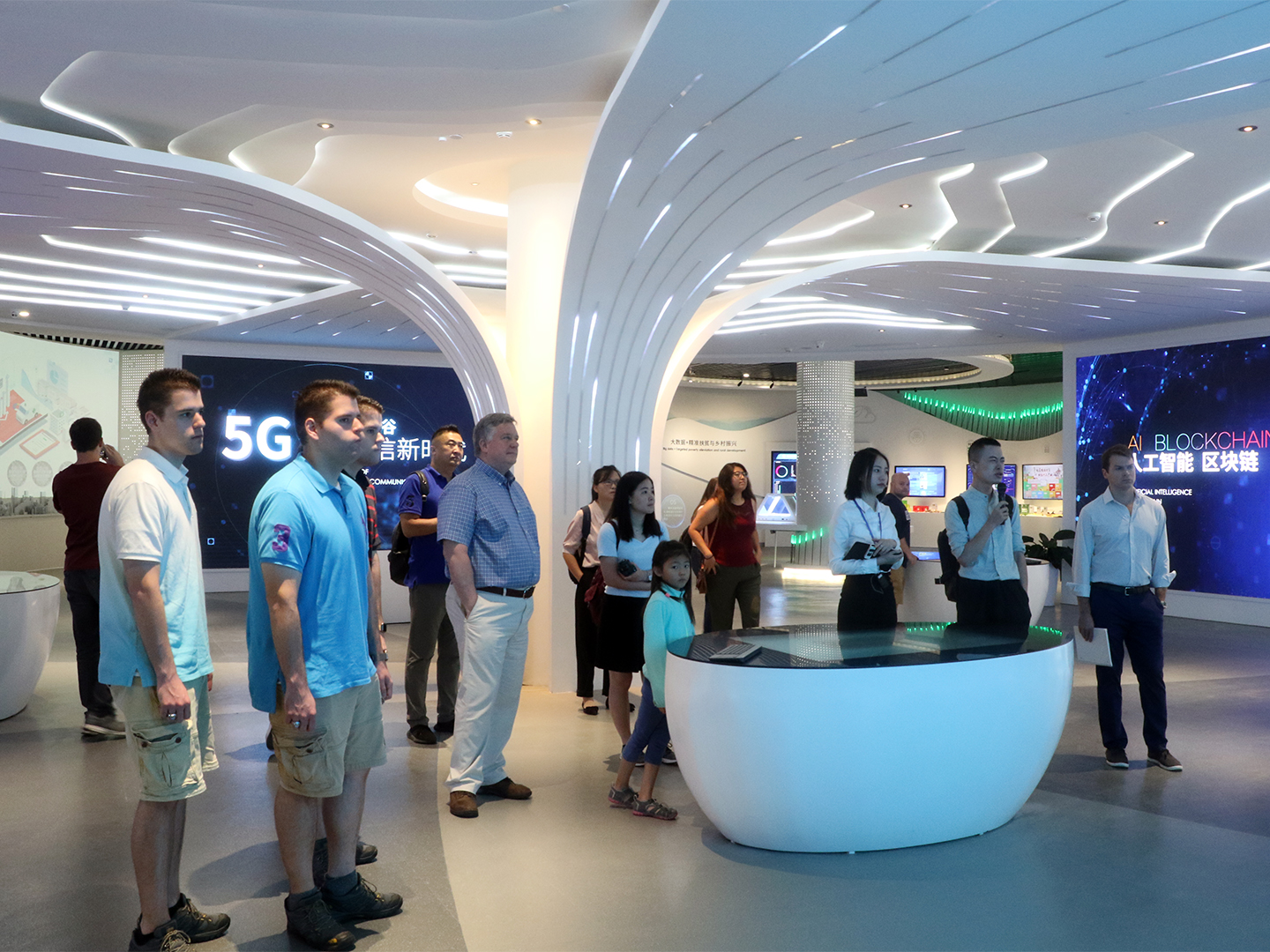 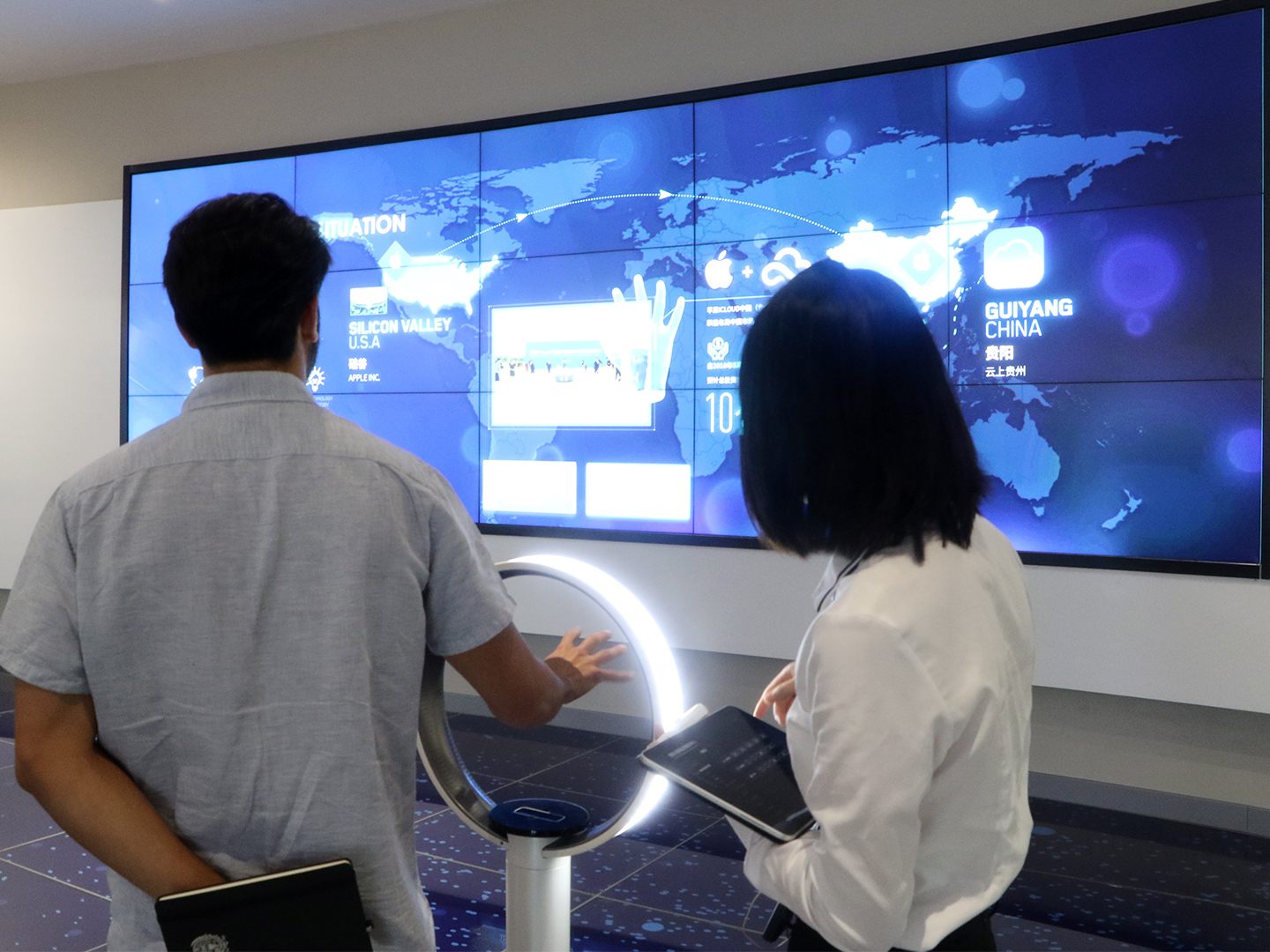 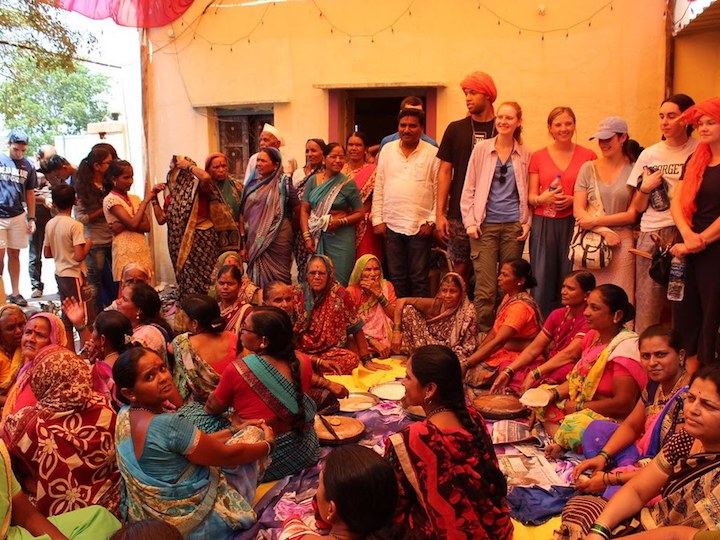 Regional Initiatives Bring the Classroom to Life During Summer Trips to China, India

Students met with Huawei executives in Shenzhen and rural farmers in Maharashtra as they conducted meetings, research, and interviews with local stakeholders on summer trips.