Amid the outbreak of COVID-19 and its rapid spread around the world, on February 13, 2020, the Georgetown University Global Health Initiative, in collaboration with the Initiative for U.S.-China Dialogue on Global Issues, convened scientific and policy experts Jennifer Huang Bouey, Rebecca Katz, John Monahan, and Erin Sorrell to examine the novel coronavirus, the challenges it creates for the global community, and how best to address them in the months ahead.

Opening the panel discussion, John Monahan, senior advisor for global health to Georgetown University President John J. DeGioia, recalled his time as the counselor to the secretary of the U.S. Department of Health and Human Services during the 2009 H1N1 flu outbreak. He said that when dealing with the uncertainty of a new virus, and how quickly circumstances can change, leaders face an incredible pressure to act.

There’s something that’s scary that’s out there, that’s unknown, maybe even because of the uncertainty there’s a pressure – whether it’s government leaders, private sector, or individuals – to act.

In order to act it’s important to understand the facts about the disease. Rebecca Katz, professor and director of the Georgetown University Center for Global Health Science and Security, shared a brief overview and timeline of events since the outbreak of COVID-19 in China. The virus first emerged in November 2019 in Wuhan, China, and was officially reported to the WHO in December 2019. By January 30, 2020 the WHO had declared the outbreak a public health emergency. Within China the number of recorded cases and deaths from the virus continues to grow, and to-date confirmed cases have been found in 35 countries across the globe.

Biology of the Disease

Erin Sorrell of Georgetown’s Department of Microbiology and Immunology gave a scientific breakdown of the disease. Scientists have identified COVID-19 as a part of the coronavirus family that also causes the common cold. It is the third virus to jump from wildlife to humans. COVID-19 seems to be of bat origin and may have had an intermediate host that transferred the virus to humans. Pangolins, which are used in China for traditional Chinese medical treatments, have been implicated as a possible intermediate host. Scientists believe the incubation period is anywhere between six to 12 days, and the virus can be transmitted easily through close contact with an infected person. The current mortality rate is around 2%, compared to a mortality rate of roughly 0.5% for the flu.

Sorrell went on to explain that there is still a lot about the disease that the scientific community is working to understand. However, compared to previous outbreaks, the response and ability of the global scientific community to work together has greatly improved. From her perspective,

The time at which we were able to get sequence information about the strain and have the information shared to a number of collaborating partners in order to develop diagnostic tests is phenomenal.

In the winter of 2002-2003 China faced its first large-scale viral outbreak, known as Severe Acute Respiratory Syndrome or SARS. The Chinese government faced domestic and international backlash for its mishandling of the epidemic at the time. Jennifer Bouey, associate professor of epidemiology at the Georgetown University School of Nursing and Health Studies and the Tang Chair in China Policy Studies at the RAND Corporation, compared how China handled SARS and now COVID-19 17 years later.

The SARS outbreak began around November 2002, but it took the Chinese government until February 2003 to notify the WHO, giving the virus three months to spread. In contrast the government reported the COVID-19 outbreak within six weeks of identifying initial cases. According to Bouey, Chinese scientists also did a much better job of isolating the sequence of the virus and sharing it with the world. China has also been working to build its health systems, centers for disease control, and flu treatment centers in the past 17 years.

While big improvements have been made, Bouey noted some similar issues from 2003 within the Chinese system that hinder the ability to share important health information with the public. With COVID-19 there was still a long delay in case reporting that allowed the virus to spread across the country. “Every reporting system at every political level, you see they’re hesitating,” said Bouey. This hesitation results from the fact that public health emergencies are seen as disruptive to China’s domestic political system. At the initial stages of the outbreak the Chinese government displayed a similar pattern of downplaying the severity of the disease and its potential impacts.

Implications for the Global Health System

Rebecca Katz finished the panel discussion with her thoughts on the current state of the global health system. She noted that China and the global community have spent the last 17 years working on international health regulations and a global infrastructure to coordinate responses to widespread disease outbreaks. After the Ebola pandemic in West Africa, the WHO reorganized and strengthened its response capabilities. A global system for sharing information about influenza has radically changed how we handle the disease.

Katz ended on an optimistic note: “We are in an entirely different place than we were when SARS emerged, and I think it’s important to keep in mind. It’s definitely not perfect, and there’s a lot that needs to be improved. But we have the scaffolding, and so we have the infrastructure to get there.”

The panel concluded their discussion by answering audience questions posed by students and members of the wider Washington community.

Jennifer Bouey offered a collaborative reminder in her closing remarks.

Again I would say this is a battle between the virus and humans. I hope it’s not between person to person, country to country, or party to party.

The event was co-sponsored by the Asian Studies Program in the Walsh School of Foreign Service. The Initiative for U.S.-China Dialogue on Global Issues plans to continue the COVID-19 discussion through a series of events in the coming months. 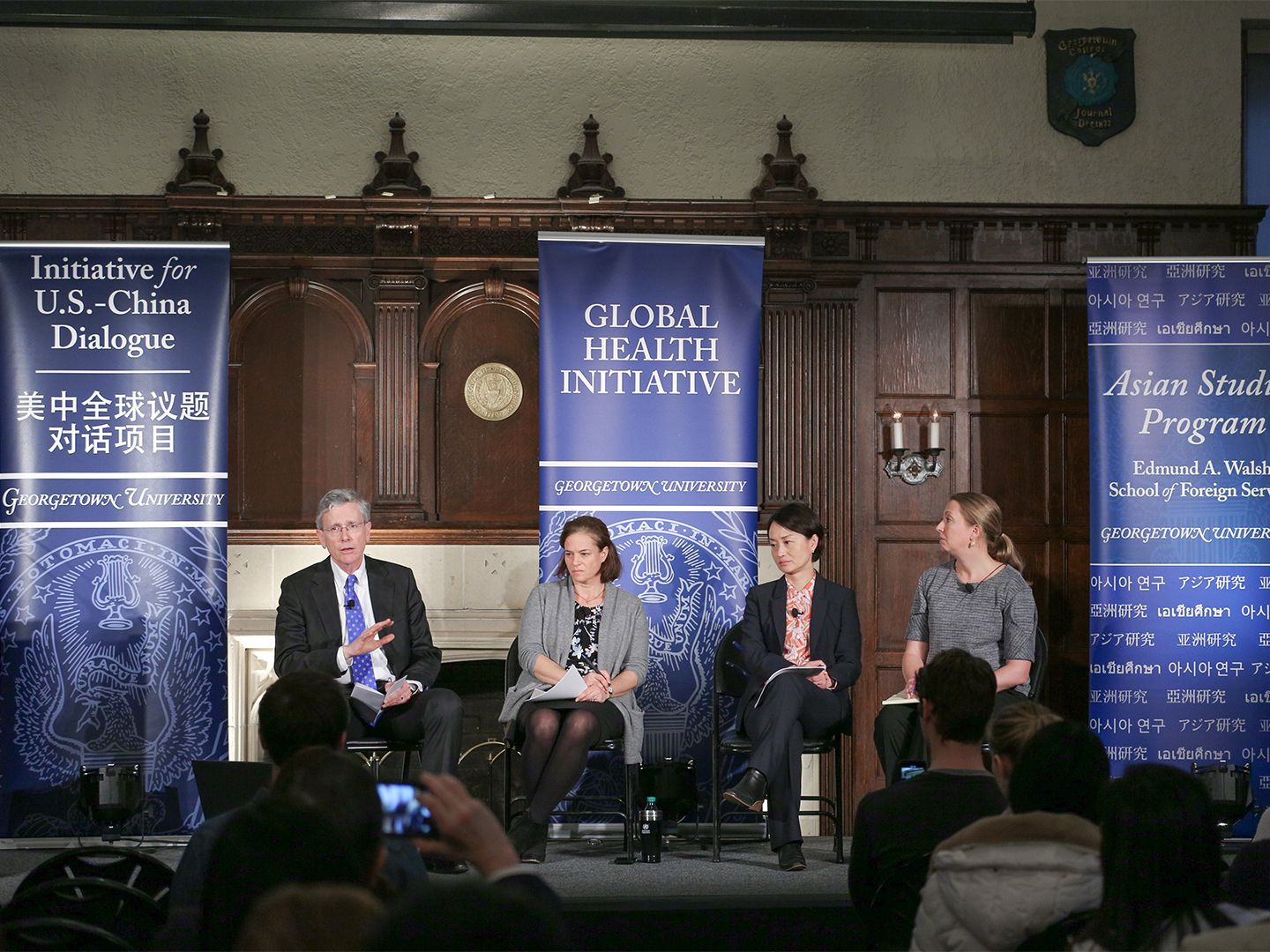 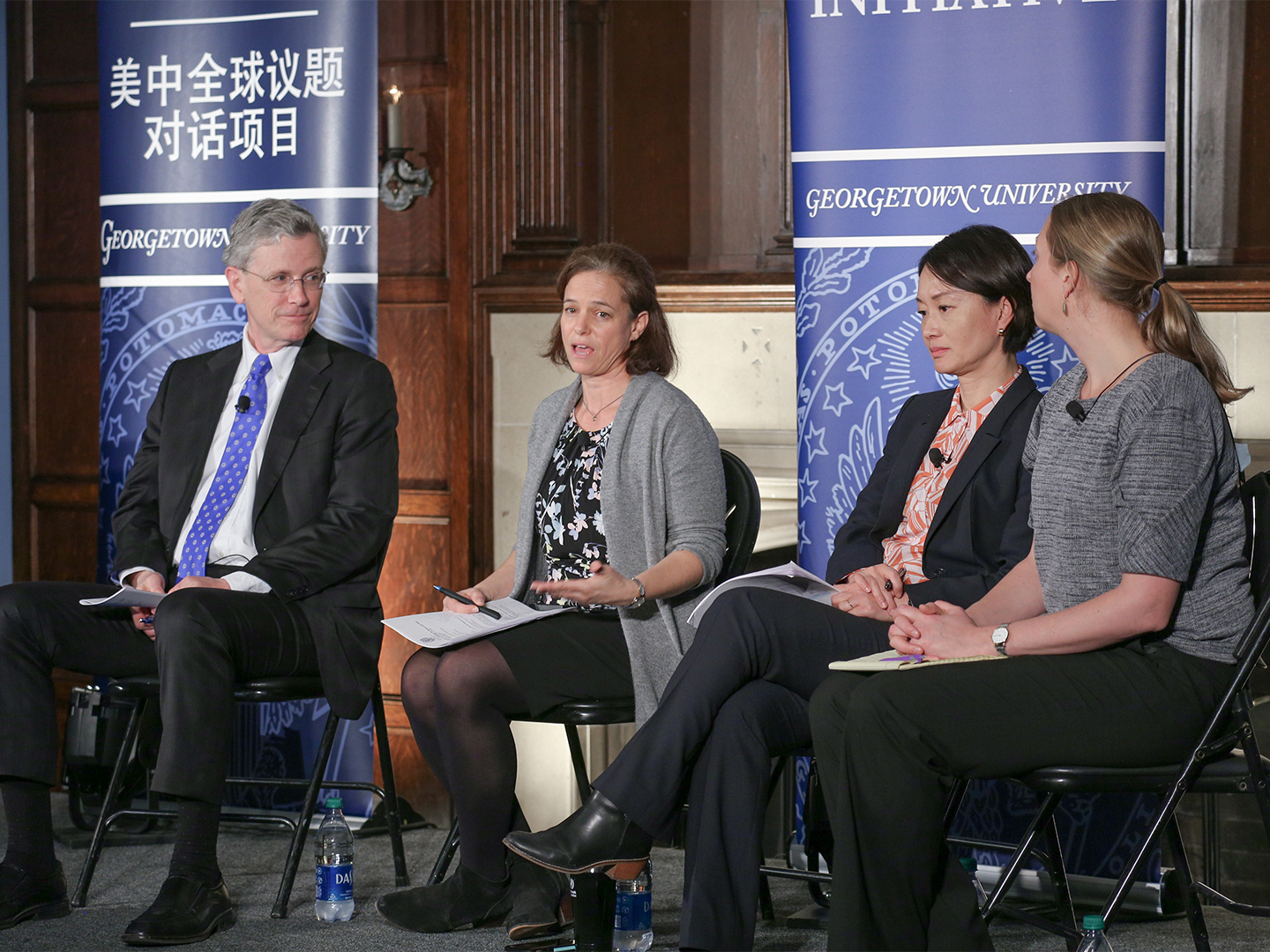 Rebecca Katz provides an overview of the COVID-19 outbreak. 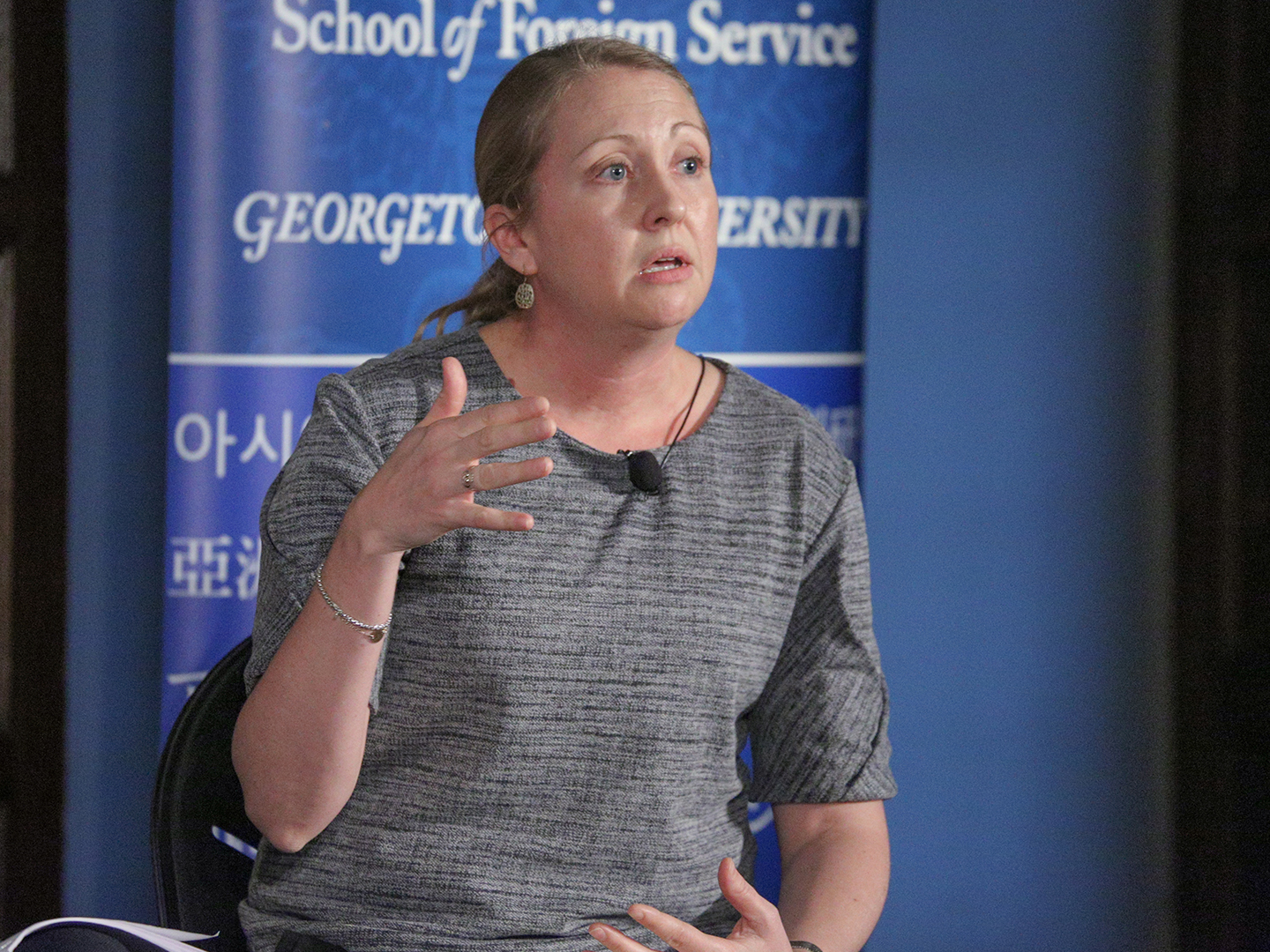 Erin Sorrell explains what the scientific community knows about the disease. 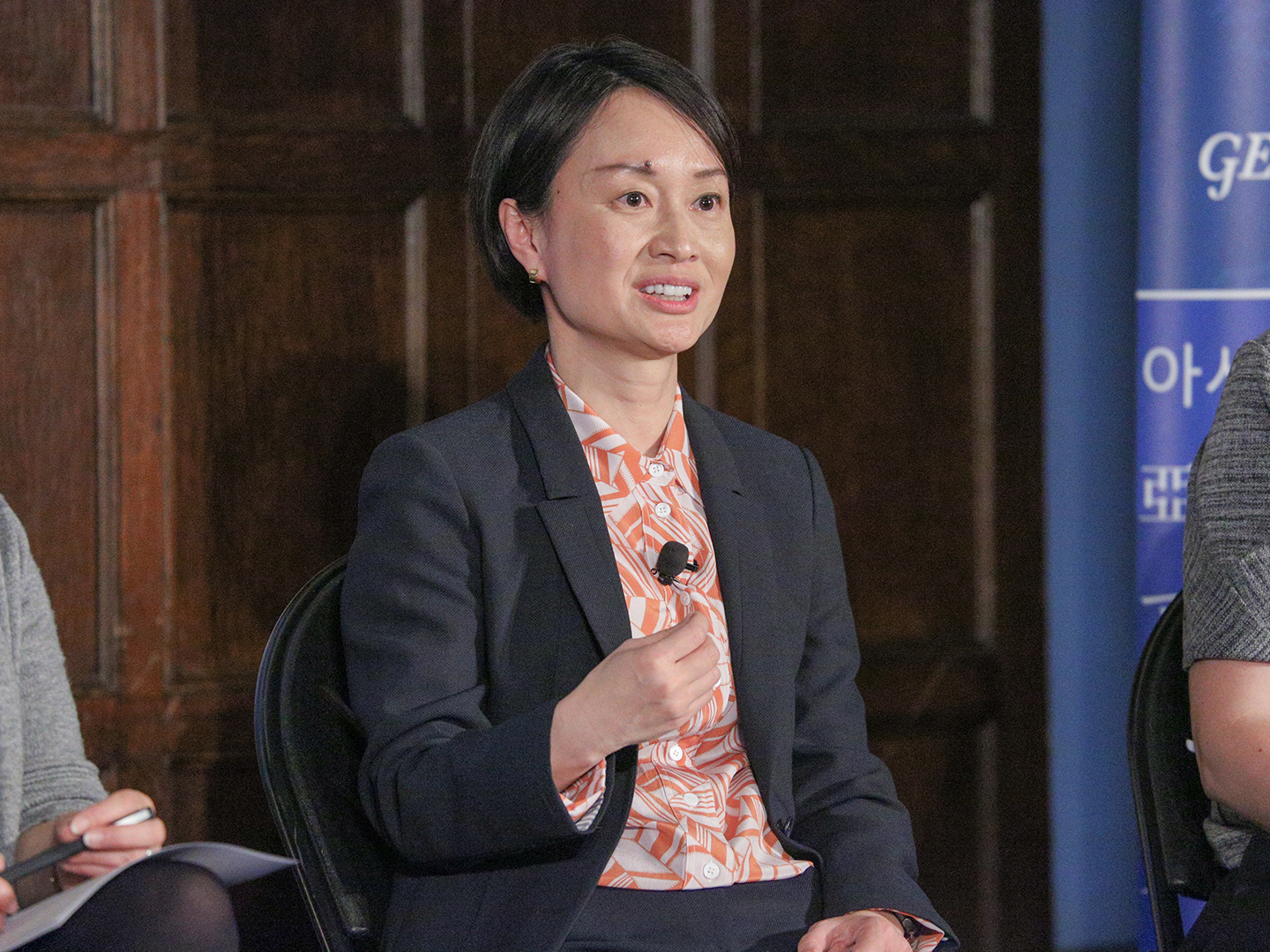 Jennifer Huang Bouey compares Chinas response to COVID-19 to the SARS outbreak in 2003. 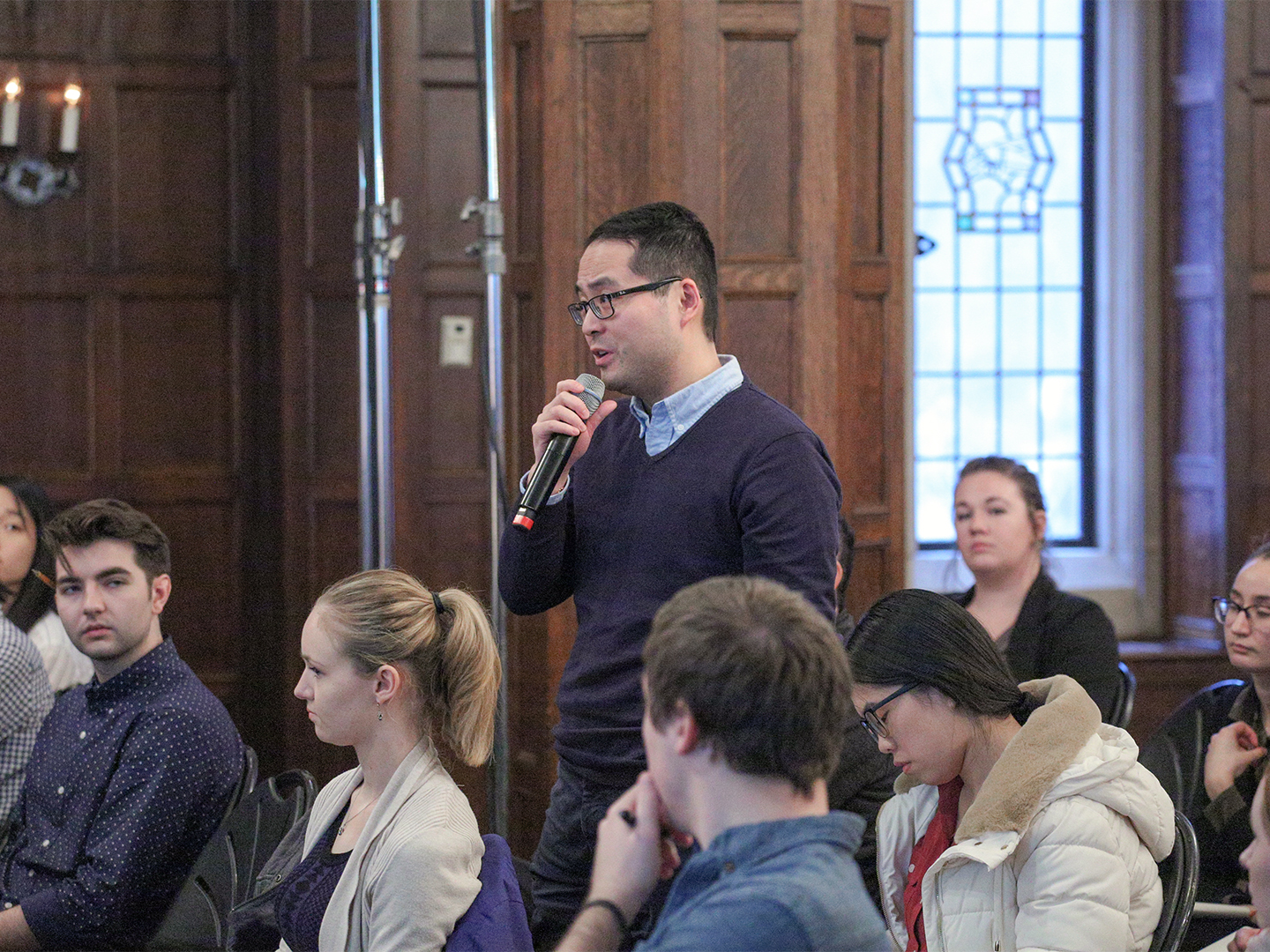